The Dowry of Anna Berlitz

Newlyweds Paul and Michelle Zook find a dowry chest and the diary of ancestor Anna Berlitz. Will they find the secret to a harmonious marriage there? From the 1800's frontier to the present time, several generations of strong men impart love and discipline to the women in their lives. 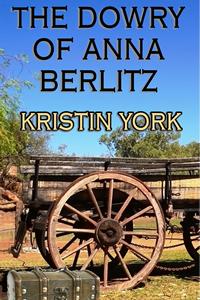 The Dowry of Anna Berlitz

"There--in the far corner." Michelle Zook stood by the front door of her newlywed's apartment, pointing and waving like an air-traffic controller. "That's right, guys. Over there by the floor lamp. Great!"

Two burly men, whose uniforms declared them employees of the Mayflower Moving Company, slid a heavy blanket chest off a two-wheeled dolly and began to remove the industrial-strength padding which had protected it from nicks and bumps during its recent move. As it was divested of the layers, Michelle could barely contain her excitement at having a genuine antique in her living room. It truly was beautiful--and far bigger than she had expected. At two-and-a-half feet tall and over four feet wide, it would undoubtedly hold quite a bit more than the cedar chest she had begged Paul to buy her for a wedding gift.

As she saw the moving men to the door, Michelle couldn't help but experience a twinge of guilt over the way she'd "punished" her new husband for not coming through with the longed-for gift. Her behavior had certainly been less than ladylike in those first few days after they'd returned from their honeymoon. Of course, Paul could have said something then about the gorgeous piece of furniture he was to inherit, but he'd been far too stubborn to give away his big secret. Instead he'd allowed Michelle her sulk, telling her nothing until a month later, after he'd scheduled the movers to bring the chest from his parents' home to the apartment he and Michelle were renting.

Michelle shut the front door and bounded across the living room to study the blanket chest. It was truly amazing! She ran her fingers over the weathered American Pine and studied the pattern that had been varnished in circles all over the chest. How lovely it was. She'd have to ask Paul what he knew about the family heirloom, and the significance of the year 1835, carefully engraved on the front, just below the lock.

Michelle was a bit concerned at first about that lock, but her worries appeared unfounded when a gentle tug on the lid revealed a deep storage area. Inhaling, the young woman savored the sweet smell of cedar chips, undoubtedly placed inside to keep linens smelling fresh. Eager to put the family heirloom to good use, she hurried to the over-stuffed hall closet and came back loaded down with an armful of blankets and sheets. Plopping the linens onto the couch, she began to carefully refold the items before putting them in the chest. She was leaning over putting the blankets away, her derriere a tempting target when Paul crept up behind her. Smack!

"Ouch!" Michelle jumped, turning to her husband with a grin. "What was that for?"

Paul wrapped his arms around his wife's waist and pulled her into a warm embrace. "Just because," he grinned as he lowered his lips to hers. After a long, hi-honey-I'm-home-from-work-kiss, perfected as only newlyweds know how, he lifted his head and regarded his wife with smiling eyes. "So, what do you think of it?"

"Oh, Paul," Michelle enthused, "It's stunning. When you said you had something special coming from home, I had no idea--I never expected--"

"--for it to be something like this?" he teased. "I guess you didn't think a country boy like me had any clue about antiques. Right?"

Michelle pushed her husband away in mock disapproval, giving him a playful slap to the arm. "You just hush! You know what I meant."

"All right, little missy," he laughed good-naturedly, "You best behave now and watch that mouth of yours, or you might find yourself in trouble."

"Oh, Paul," Michelle rolled her eyes at the comment. "Where are you coming up with this cave-man routine?"

Paul waggled his eyebrows at his wife. "A caveman, am I? Well now, I guess I've neglected to tell you the story of this fine piece of early American craftsmanship."

"No, you haven't, silly! You've told me all about the way it's been handed down from generation to generation. For heaven's sake," Michelle added flippantly, "you've told me the story at least a hundred times in the last week."

"Ah--but have I told you what comes with the chest?" Paul asked in his best Sean Connery imitation.

"There's something else?" Michelle's eyes were twinkling with the thought. "What is it, honey? Come on--don't keep me in suspense."

Instead of a direct answer, Paul crouched down to open the wide drawer near the bottom of the chest. "Here it is," he murmured as he rose from his position. In his hand, he held a long wooden stick, one end bent into a u--shaped handle. "Do you know what this is?"

Michelle took the cane and looked at her husband questioningly. "Well, it looks like an old walking stick, but it's so flimsy, I don't see how it would hold anyone up. Look how it bends," she said, wiggling the long stick back and forth to illustrate the point.

"Be careful with that!" Paul exclaimed, taking the cane reverently from his wife's hands. "And it's not the kind of cane you walk with, 'Chelle. It's a schoolmaster's cane. And it's as old as the chest."

Michelle's eyes grew wide as she realized she could have broken something that had lasted for more than 160 years. "I'm sorry, honey. But," she continued with wide-eyed innocence, "What do you mean, it's a schoolmaster's cane? Like some kind of blackboard pointer or something?"

"Well," Paul looked up at his wife with a knowing smile, as he began to flex the long rod ever so gently, "I'm sure it may have been used for that, babe, but that wasn't its intended function."

The look on Michelle's face was one of utter confusion when she asked, "Well, what, then? What would some old-time school teacher have used this stick for, if not as a pointer?"

Paul couldn't help but be amused by his wife's naivete. Good lord, had she never been spanked? Maybe, he mused, that was why she was such a brat at times. Well, no time like the present to introduce her to the real world. "It was used, my sweet little wife, to maintain classroom discipline."

Michelle's eyes grew even wider, and she tossed auburn curls over her shoulder with a disdainful sniff. "Are you telling me they used to beat children with this stick? Why, Paul, that's awful. It's positively barbaric! What kind of ancestors did you have?"

Paul was quite surprised by his wife's sudden vehemence, and at the fact that her words left him feeling defensive. "Well, I expect my ancestors were pretty normal people, Michelle. After all, we're talking about the 1800's here. There were strict rules for children back then, and equally strict punishments. And," he continued as he tipped her chin up and looked deeply into his wife's green eyes, "it wasn't just children who had to watch their step. A wife was expected to abide by the rules of the home as well. If she didn't, she would find herself face down over her husband's knee."

Michelle felt her heart pounding in her chest as she stood staring up into the brown depths of Paul's eyes. She'd never seen him like this--so calm, so in control. Suddenly, she was wiping damp palms on her jeans, and hoping that her husband couldn't read what was in her mind. For, while she wanted to be outraged at his words, she simply could not seem to stop the way her stomach was flip-flopping. Something about that thought--the thought of being taken over the knee of her husband--made liquid heat pool in the most embarrassing of places. Her face aflame, she pulled away from her husband's grasp. Surely it couldn't be normal to feel like this.