The Duke of Christmas Past

The only thing Donovan Ellis, Seventh Duke of Gatewood, wants for Christmas is for it to be over. Too much sadness surrounds the holiday. Horrors he’d prefer to forget. Oh, there’s one present he yearns for with all his heart, but his foolishness pushed her into the arms of another. So if he can’t have the one thing he truly desires, then he just wants to be left alone to drown in his own misery. But when a ghostly apparition visits him, claiming things can be set right, can Donovan believe? Can he trust the Duke of Christmas Past? Or will meddling in the past bring more heartache than he already has to bear? 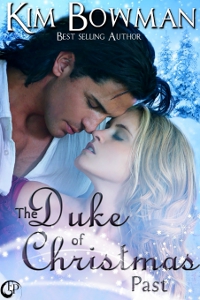 The Duke of Christmas Past

CHAIRS WEREN’T THE only things flying at Lord and Lady Freemont’s annual Christmas Ball. Throw in a duke, two appallingly outspoken ladies, an earl, a young naval officer, and enough fists to make Gentleman Jackson proud, and you have successfully recounted every delicious detail of this past season’s unmatchable scandal.
One has to wonder how it all started. Some say Gatewood was merely defending his sister’s honor. Others say Norcross seduced the wits out of not one but two women in the very same night! And the worst of the gossip, though it pains me to admit to it as such, comes to us in the form of a first-hand account. Miss Tess Warren was seen smiling, yes smiling (such a vulgar act to begin with) at the Duke of Gatewood not minutes before he was beaten with a chair. Now, what the devil (and please pardon my language, it really is inexcusable, but given the circumstances it must be said) does Miss Tess Warren have to smile about? And what, dear readers, has caused the good duke to lose his impeccable manners, not to mention his mind? 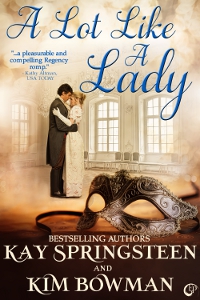 A Lot Like A Lady
Kay Springsteen, Kim Bowman
In Shelf
$0.99
Tweets by
sirenbookstrand