The Fall From Paradise Valley

Such beautiful people, such beautiful lives. But there’s a dark side to Paradise. Three prominent women friends live in this Eden—married to powerful men in a world of privilege: grand houses, lavish parties and charity balls, the latest clothes, jewels, sleek cars. Why do they make the unfortunate choices they do?

Bored Christina drifts into an affair with the family lawyer that nearly ends her husband’s political career. Laise closes the door on a marriage she only thought existed. Miriam runs from a husband whose sadism nearly destroys her. Three complicated lives that play out in the end with murder and the terrifying heights of the Grand Canyon. 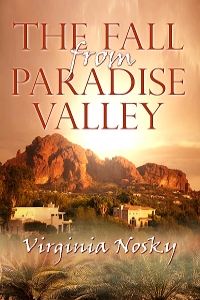 The Fall From Paradise Valley

Christina stared at the little white card. She wouldn’t go to him. He was gone and she could walk away. It was only when he was with her that she weakened. Felt so overpowered. 1602. She got up, leaving the plastic card on the table.

She waited for the small elevator to the parking garage, pacing nervously, her eyes on the ugly blue carpeting. Behind her two men got off one of the big, brass elevator doors to the upper floors. The door stayed open. Christina turned and stared at it, then slowly walked over. Her head buzzed. She stepped in. She heard the ding of the garage elevator as its door slid open at the same moment the brass doors closed behind her.

1602. Her hand trembled as she pushed the sixteenth floor button. She could no longer deny she was aroused. She’d caught fire the moment he’d touched her down at the table and now she couldn’t bear waiting to be with him. She paced in the elevator in an agony that someone would stop its rush upward. Wind whooshed in the airshaft, and then the car slowed and stopped, the doors sliding open silently. Frantic she searched the number printed on the walls. Which way? Which way?

She had left the key card on the table in the bar. She raised her hand to tap on the door. There was one more chance to stop the insanity. She rested her head on the door, breathing in short gasps.

Then it was open and he was there and she was in his arms, opening her mouth to his, wanting him more than she’d ever wanted anything. Her fingers tore at his tie, unbuttoned his shirt, her mouth drinking in the taste of his throat, the black springy whorls on his chest.

He slid her jacket from her shoulders and began to unbutton her blouse.

All those buttons, she thought frantically. “Tear it,” she begged.