Someone is killing department store Santas, but why? Dan Landis, subjected to working Loss Prevention at a local department store for the season intends to find out. If he can stop tripping over red velvet draped corpses long enough to investigate, and to keep himself out of jail. 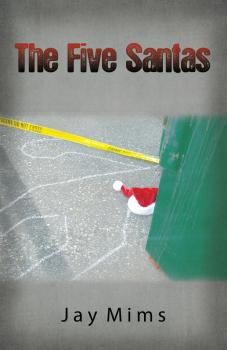 Review of The Five Santas by Jay Mims by blogger JeanBookNerd:

The holidays, shopping mall Santas, and murder? Who would have ever thought that those three elements would make for a great murder mystery book? The Five Santas by Jay Mims was a well thought-out story about a private investigator named Mr. Dan Landis, who tries to uncover the mysteries behind the murders of the department store Santas.

Mims’ character development for Mr. Dan Landis was radiant. He is your atypical detective that manages to be at the wrong place at the wrong time. The private investigator has a strange sense of humor that I found myself laughing and smiling throughout the book. Even his investigation process is out of the norm but pulls the reader in to investigate alongside Mr. Dan Landis. The other characters are carefully crafted that readily engages the reader page-by-page.

The conclusion of the story was just the right mixture of satisfaction and anticipation. Mims has provided us a great holiday/murder mystery story that is surely appreciated. Mims’ writing style was easy to follow and had myself guessing who the culprit is until the end. It was a fun and suspenseful story. It was a perfect read during this merry time of the year. I look forward to Mims’ works as The Five Santas made me a fan of his.

What a different book- a breath of fresh air!
In a world of detective stories filled with overt violence and constantly seething rage, this is one that takes a lighter approach. Mims' first effort is fun, page turning and he really finds his voice as he goes along. He drops some big bombs right at the end and I am very interested in what happens next. I would recommend this book to any age group going down to middle school. Very family friendly. Low violence even though it's a murder mystery and the romance is sweet, not explicit.

4.0 out of 5 stars More Dan Landis, please!, February 10, 2012 on Amazon
By
Kristy - See all my reviews
This review is from: The Five Santas (Oncoming Storm) (Paperback)
I really enjoyed this fun, entertaining mystery/detective novel. The characters are quirky and realistic--I especially loved Dan's sense of humor, and all his pop culture/movie/TV references and one-liners. A well-plotted mystery, a touch of future romantic possibility, and five santas... what's not to love? And at the end, we're left with the carrot-on-the-stick tease of the next Dan Landis adventure! Can't wait to see what happens next with Dan and his cohorts.

4.0 out of 5 stars What happened to Santa?, December 14, 2011 on Amazon
By
Bonnie Colvert (Florida, USA) - See all my reviews
This review is from: The Five Santas (The Oncoming Storm) (Kindle Edition)
What an enjoyable read, especially for me because it is that holiday time of year. It took me a little while with the hustle and bustle of the holiday, shopping, working, extra errands etc. But let me tell you every little snippet I could read at any given time was well worth it. To me this is a laugh out loud funny story with the characters being so believable. The sad part is why is someone killing the departmnt store Santa's? See how Mr. Dan Landis, P.I. struggles through to figure out this mystery. I am hoping that this character is going to turn into a series!