The Gatecrasher by Stephen Albrow

Curiosity killed the cat is a saying with which Charlotte is familiar, but she doesn't intend to pay it any attention. When she hears that a new lord, Richard Parker, has moved into the local manor she is immediately intrigued, particularly when he is featured on the local news and she sees how good-looking he is.

Rumours of wild parties have been spreading amongst the local population. The new lord of the manor has been vigorously discouraging ramblers from walking near his property and it has been said that he doesn't want his neighbours to know exactly what is going on at his house.

This only adds to the thrill Charlotte feels when she finds herself climbing over the wall of the manor house. It's even possible that Richard Parker will deal with her severely; that's what Charlotte is hoping, anyway.

The Gift by Dolores Day

Susanna is bored and bored women are dangerous, especially if they have the money and leisure to feel time weighing heavily on their beautifully clad shoulders. Married to the much older Lord Marksbury, whose skills in the bedroom are not so much inferior as non-existent, Susanna longs for a companion who will understand her needs.

Luckily for Susanna, help is at hand in the shape of an old friend, Leonie, Contessa Lambertz, who is happy to recommend someone who has the outgoing nature to help her to forget her unhappy marriage. Arleta is an expert in the bedchamber and has all the skills that Susanna could possibly desire.

With this liberation comes a surprising conclusion, one that Leonie could scarcely have imagined when she first agreed to help her friend.

Fairgrounds are fascinating places; the sparkling lights, the screams of the riders on the waltzers, the tantalising smells wafting across the field from the hot food stands. And, most of all, the exotic strangers that man the stalls and the rides and bring a touch of light and glamour to the most boring provincial town.

Fairgrounds are also places where risks are taken and people behave with less constraint than they display in their everyday lives. This is a place where you can cast off the uniform of normality and release your wild alter-ego.

When our heroine decides to submit herself to the skills of the fortune teller she little imagines what the night will bring. She expects to be told that she will meet a tall, handsome stranger, but this prediction hardly describes what will eventually happen to her when she visits the fairground and is taken on the ride of her life.

Penny is a good girl. She works in accounts. So when she finds herself, sick with nerves and apprehension, waiting to perform onstage as a lap dancer at a gentleman's club, it's clear that some encouragement is needed.

She is relieved to be rescued by her far more experienced colleague, Candy Cane, who leads her to a deserted dressing room, mixes a lethal cocktail and offers some welcome advice. After a couple of glasses Penny is invited to explore her creativity and, to her surprise, she finds that the cocktail has worked its magic.

Candy knows exactly what to do with her body and invites Penny to find her inner exhibitionist which, after a shaky start, she does. Just one masterclass with Candy is enough to expose a wild side that she never knew that she had. The genie is out of the bottle and the audience is in for a performance that will have them all begging for more.

The Boss by DMW Carol

He is so arrogant, so sure of his authority. He struts as he moves around the office (his own little fiefdom) and his alpha male attitude is guaranteed to bring out the worst in any employee who questions his power. The Boss had better be careful because he is soon to find his status as top dog being seriously undermined.

One of The Boss's workers is a woman, unimpressed by his machismo, his legendary temper, his overbearing attitude towards her colleagues. She wants to teach him a lesson he won't forget. She plans his humiliation even as she sits at her desk.

It will be on a Friday, when the working day is over and the staff visit the pub for a quick drink before going home. As they depart for domestic bliss, she will be left alone with The Boss. Back in his little domain she will make sure that he is no longer king of the office jungle.

These stories have also been published in Ultimate Submission ISBN 9781905170968 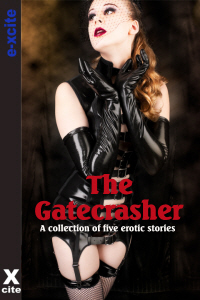 Charlotte longed to be dominated by the handsome Lord of the Manor, hence the outfit she’d chosen to trespass in. Her breasts were made to look enormous by her highly restrictive push-up corset, while her rubber skirt barely covered her arse, exposing her highly spankable thighs. As soon as he saw her, the Lord would sense her deep, submissive desires, just as she had sensed his authoritarian manner the moment she’d seen him on TV. But first the rumours had to be true, and there was only one way of finding it!
Charlotte stepped round the corner, her pulse racing, as she feasted her eyes on a wall of bare flesh. A naked blonde dived into the pool, which was already filled with copulating couples, whose thrusting churned up the water’s surface. It was an orgy, all right, but what about the more colourful talk of leather, chains and cries of pain? Charlotte hid behind a marble statue, then, peeking out, she spotted him. He wore a long, dark cloak and was carrying a whip. A pair of leather-clad twins stood one either side of him.
A tortured moan filled the night-time air, diverting Charlotte’s attention to the far side of the pool. Her pussy pulsed, as she saw a young woman draped across another’s lap. The second woman, dressed in a corset and brandishing a rubber baton, delivered six fierce blows to the younger girl’s behind. Charlotte watched, transfixed, and then she turned to Richard Parker. He was watching just as eagerly, while fingering the shaft of his whip, as if impatient for the domme to strike the bad girl even harder.
Watching the young Lord caressing his whip made Charlotte’s pussy drip with juice. The domme’s corset and baton had excited her, too, because it proved this was more than a swingers’ night. Darker deeds were taking place here, but did she dare to get involved? She wondered what the young woman had done to incur such a painful act of retribution. But it can’t have been any worse than trespassing, so Charlotte’s punishment was sure to be even more extreme.
An icy shiver turned her flesh to goose-bumps, as another howl of anguish filled the air. The girl was having her hair pulled now. The domme was using it like a dog’s lead, dragging the girl around the pool to face the wrath of Richard Parker. Charlotte heard the hum and lash of his whip, as he tested out his weapon on the poolside paving, the whiplash crack calling everyone to attention. All the sexed up couples and trios in the pool turned towards their Master, eager to see him putting his whip to use. Even Charlotte stepped forward, keen to get a better view of the tall, muscular nobleman chastising the girl.
No sooner had she taken the step, Charlotte was regretting it. She hadn’t noticed the gun dogs lying in the corner, obediently watching over their Lord and Master. And the dogs hadn’t noticed Charlotte either, but now she was firmly in their sights. Growling, barking and baring their fangs, they sprinted forth and surrounded her. They knew their job. It was to hold the intruder captive till their Master had stepped forward and declared her friend or foe.
With the dogs having made such a frightful sound, all eyes now turned to Charlotte. The other young submissive was spared a whipping, as Richard Parker went to see what his hounds had caught. His cloak trailing in the wind, he strode towards the gatecrasher, a leather-clad twin on either side. He called off the dogs, who fell silent and stopped jumping the very instant they heard his voice.
“So, what have we here?” asked Richard Parker, eyeing up Charlotte’s tempting body. His gaze lingered over her thighs and bottom, as if searching for the best bits to whip and spank.
“I’d heard about your parties,” Charlotte whispered, her voice getting stuck in the back of her throat.
“I’d heard about your parties, Master,” the dominant Lord corrected her, then he made her repeat her words again. She did so without question. He was not a man to argue with. Standing well over six feet tall, and with a whip in his hand, Richard Parker demanded total compliance!
“Well, I’m afraid you weren’t invited,” he said, making eye contact with Charlotte for the very first time. His piercing eyes seemed to see right through her, then just like that, he turned and walked away. It felt to Charlotte like the ultimate snub, but in fact it was just part of Richard Parker’s game. As he marched back to the pool, he suddenly barked a command to his two female slaves, ordering them to grab the trespasser and bring her to the punishment zone.
Obeying their Master, the leather-clad twins both grabbed one of Charlotte’s slender arms. She didn’t know whether to fight with them, or just let them lead her over to the pool. In the end, she had no choice – though cute and pretty, the twins were surprisingly strong. Not only that, they were more than happy to manhandle Charlotte in order to fulfil their Master’s wishes.