The Goblins of Christmas

It’s Christmas time in Athens, and when George discovers that his Rovani partner, Yeraki, has never celebrated the holiday, he and the rest of their taverna band gleefully fill Yeri in on the mythology surrounding the Christmas goblins who wreak havoc in any house that isn’t blessed.

Yeri announces that he’s going to catch these goblins, and the hilarity ensues as the goblins unleash twelve nights of pranks and practical jokes on them. Life may never be the same for the pair, assuming their sanity survives what’s coming. 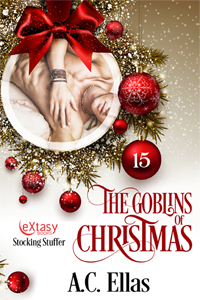 The Goblins of Christmas

Although their schedule rarely varied, the signs of winter’s approach were there. The press of tourists, so thick on the ground in the summer, was easing off. The weather was cooler, though not yet cold, and the days were growing shorter. Or the nights were getting longer, depending on one’s point of view. Yeraki preferred nighttime, his feline ancestry and slit-pupiled cat eyes found the darkness easier to deal with than sunlight.

Oxi Day came and went. As far as Yeri could tell, that holiday was dedicated to remembering something that had happened so long ago that nobody actually remembered why the date was important or even who had said no in the first place. In November, the Christmas decorations started to appear, sporadically at first, and then, they were abundant and everywhere.

The Christmas season started in early December with the feast of Saint Nicholas. Boats and trees were everywhere, all strung with lights. The weather was pleasantly cool now, though George called it cold. Christmas approached rapidly. The entire city had a festive air, the shops were selling treats and presents at a furious pace, the lights were dazzling, the stories were interesting, the music was wonderful. Yeri had never seen anything like it.

Before George, Yeri hadn’t celebrated holidays; he’d had only the barest notion of what holidays were. He knew more about the religious side to the holidays than the festive; the priests at the Compound’s church had conducted the holiday masses as well as teaching the gatakia about them. Once Yeri had been sold, even the religious holidays ceased to be observed. As a gladiator, he’d been kept in a cage when he wasn’t training or fighting, and that hadn’t changed when he was sold to the Dance Corps. Holidays to the dancers meant extra performances but nothing more than that. The army had also kept him caged when he wasn’t working, and as a slave, he had been beneath the notice of the men he served, and they never socialized with him. After Helen had rescued him, things had started to change, but he’d been too ill and too weak to participate in any festivities.

When George and Taiki erected a simple model fishing boat in the living room and carefully pointed the bow toward the center of the flat, Yeri asked why.

“It’s tradition,” Taiki told him. “Saint Nicholas is the protector of those who go to sea, and we are a nation of sailors. We point the prow inward so that luck enters the home.”

“And the tree?” Yeri cast his gaze on the evergreen standing nearby. It was a live tree, sitting in a pot of soil and not very big, but then, their flat wasn’t very big either.

Still baffled, Yeri helped. Tinsel went on the tree, a star on top. Lights went on the boat and looked very cheerful once George plugged them in. The two men sat on the couch and admired their handiwork. Yeri served snacks and kept his multitude of questions to himself. He vaguely recalled seeing similar things in Helen’s home last winter. He’d never asked about it; Helen had been very kind, but she hadn’t been one to encourage familiarity from her property.

Yeri sat at George’s feet and leaned against his leg. Before long, he felt the heat of George’s large, human hand as it stroked his mane. He closed his eyes and reflected on how much things had changed in the six months he’d belonged to George. The upwelling of happiness from someplace deep within took him by surprise and erupted in a purr that vibrated George’s leg.

The hand resumed stroking. “What are you happy about?”

That wasn’t easy to answer. Yeri wasn’t entirely sure why he was so happy. He settled on the simplest answer. “Being yours, master.”

George leaned forward, got a hand under Yeri’s arm and pulled the unresisting Rovani into his lap. Once Yeri was on him, he wrapped his arms around Yeri and said, “You make me happy, too.”

Yeri relaxed into George, resting his head on the human’s shoulder but keeping his head turned away enough that he wouldn’t scent-lock. George wasn’t in the mood for sex.

“Did you enjoy helping us decorate?”

“Yes, master... but, I don’t understand what boats and trees and lights have to do with the birth of Christ,” he finally ventured, boldly in his opinion, but George encouraged him to ask questions.

George chuckled. “I love the Christmas season, but I agree that most of the trappings aren’t really Christian in origin. The old pagan festivals of the ancients sort of changed to fit into the new religion.”

“There’s a lot of similarity between the stories of Saint Nicholas and the mythology of Poseidon,” Taiki added. “And let’s not forget that Dionysus was also born on the 25th of December, and the twelve nights were his first. That’s why we have to protect our houses from the goblins.”

“Goblins?” Yeri wondered if Taiki was trying to pull one over on him. He’d never heard of such a thing.

“Yes, goblins,” George agreed. “Some call them hobgoblins or sprites, but whatever you call them, they’ll cause all manner of mischief if they get loose in a home.”

Certain now that the humans were teasing him, Yeri snorted softly but kept his mouth shut. He listened as the men listed all manner of minor disasters, from the milk spoiling to all the closets being disarranged, that they laid at the feet of these so-called goblins.