The Handfasted Wife is the story of the Norman Conquest from the perspective of Edith (Elditha) Swanneck, Harold’s common-law wife. She is set aside for a political marriage when Harold becomes king in 1066. Determined to protect her children’s destinies and control her economic future, she is taken to William’s camp when her estate is sacked on the eve of the Battle of Hastings. She later identifies Harold’s body on the battlefield and her youngest son becomes a Norman hostage.

Elditha avoids an arranged marriage with a Breton knight by which her son might or might not be given into his care. She makes her own choice and sets out through strife-torn England to seek help from her sons in Dublin. However, events again overtake her.

Harold’s mother, Gytha, holds up in her city of Exeter with other aristocratic women, including Elditha’s eldest daughter. The girl is at risk, drawing Elditha back to Exeter and resistance. Initially supported by Exeter’s burghers the women withstand William’s siege. However, after three horrific weeks they negotiate exile and the removal of their treasure. Elditha takes sanctuary in a convent where eventually she is reunited with her hostage son. This is an adventure story of love, loss, survival and reconciliation. 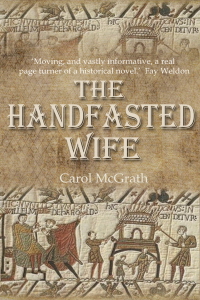 Tell us a story, you say. Then let us sit by our frames and listen to a tale while we work. Here is a story for you, sisters. Its characters: a king, his mother, his lady, a queen and a stolen child. We have adventures to embroider, a broken promise, a great treasure and riddles to resolve. Charcoal glows in the brazier. The afternoon draws in, so listen carefully as my tale unfolds.
Do you recall the Godwin estate at Reredfelle? No? Let me tell you about this place. Reredfelle was a sprawling territory of ash, beech and oak only a day’s ride from Canterbury. On its southernmost edge, where the forest opened up into parkland, fields and hamlets, Earl Godwin of Wessex built his new, two-storey hall, a magnificent thatched building. The long side walls were painted with great hunting birds and in the centre of the front short wall an oak door led into an aisled room with a raised central hearth. Upstairs, Earl Godwin had his private rooms, an antechamber and, through a doorway hung with a curtain of crimson and blue tapestry, his own bedchamber. Here, he had two windows of glass, like those in the old minsters, set into deep oak frames; so you see, his wealth was great and he was not shy of showing it.
A wide track meandered past the women’s bower, a kitchen, stores and barns to a three-barred gate set into a palisade which protected the hall, its outer buildings, herb gardens, dovecote, an orchard and the Chapel to our Lady. The same track curved from the gate, through parkland loved by huntsmen, and disappeared into the encroaching forest beyond. There was, however, a secret way in and out of Reredfelle. A small latched door was set into the orchard wall, concealed by fruit trees, which were shaped to arch over and conceal it. On the other side of the wall, a shaded path curled down through undergrowth to a riverbed.
Reredfelle was loved by the canny old Earl, who came there to hunt and scheme; its desolation began after his death. The countryside was gripped by a festering plague. The population in the villages shrank and the estate was deserted except for the reeve who watched over the fields, and an odd collection of servants. The painted birds on the outside walls of the hall faded. The herb garden grew wild. Barns lay empty. The bower was silent. Tapestries gathered dust and the glass windows dulled. Years slipped by until King Edward himself passed away and Earl Harold, Godwin’s son, was elected as England’s new king.
Now, sisters, this is not King Harold’s story. That one you already know. My tale follows the fortunes of the woman whom Harold loved, and who passionately loved him back; his handfasted wife, Edith, she of the elegant swan’s neck. But let us call her Elditha, for in this story there is a second Edith, and names can confuse. After he became king he betrayed Elditha and sent her away. But that is not the end of her story. It is but a beginning.