After World War I, San Francisco is a wild town. Abandoned by her lover, Violetta is swept up in the new, freer ways and becomes America’s first embedded journalist. She finds work in a brothel that caters to San Francisco’s most powerful men, to write her epic story on the conditions of working women. But federal agents looking to clamp down on both vice and workers’ rights don’t take kindly to her modern views. Shorter dresses, fair pay for women, and the dark and frightening world of sex and politics give Violetta a learning experience of a lifetime. 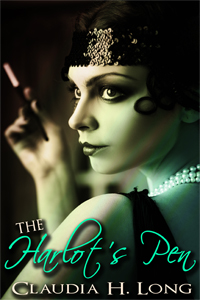 I clutched at the small fur hat I had bought on Market Street the week before. The sun sparkled on the San Francisco Bay, giving an illusion of warmth, but the wind was quite fierce on the water, and Leticia, her arm linked through mine, shivered as the wind cut through her cloth coat. I generously pressed her close. I was glad that I had worn the little beaver hat and the fur muff. There was no sense in being cold, even on the way to a Progressive Labor Party rally.

The stiff breeze whipped our skirts against one another. Standing apart, Jacqueline laughed, her exquisite wool dress a sheath of coral clinging to her legs, her head thrown back to disclose an aristocratic throat and a string of perfect pearls. I could see yet another advantage in the modern style, and considered Jacqueline’s perfect ensemble with an eye to reproducing it on myself on another day, when we were not going to support a call for Worker’s Rights and the Minimum Wage for Women.

As the pristine, white buildings of the San Francisco hills receded, the more quaint and industrial red brick of Oakland came nearer, a study in contrasts of color, wealth, and attitude. San Francisco had grown more fashionable and grandiose as the end of the War had brought men and money pouring in, while Oakland remained its solid, stolid self, the working man polishing the Grand Gentleman’s white shoes.

The three of us walked from the ferry landing up almost to the Tribune offices as its clock tower chimed the hour. Flyers announcing Anita Whitney’s Progressive Labor Party Rally lay scattered along the side of the street, the wind tossing them into little whirling spirals of paper progressiveness that swirled and caught at my shoes, then dispersed to be trodden upon by the following boots. The crowd grew larger with each block, men in long coats and women clutching somber hats with black-gloved hands.

On the corner of Fourteenth Street and Telegraph Avenue, a woman in a tight red dress stood against the breeze, coatless, hatless, and rubbing her gloved hand against her running nose. “A bit early to be looking for work,” Jacqueline remarked, reaching into her little bag.

I glanced at the woman, and then stopped. I had seen prostitutes before, of course, but there was a fury in her eyes that arrested me. The woman looked cold, her rouged lips and cheeks reddened further by the wind. “Lovely hat, ma’am,” the woman said to me, her watering eyes fixed on my fur. Impulsively, I started to pull off the fur hat, but Jacqueline was quicker, handing her a dollar. The whore sneered, but pocketed the coin.

“You’re looking for commerce in the wrong place,” I said. “The men going to this meeting aren’t going to have the money to spend on you. Come with us. This meeting is for you.” I reached out to her, and she recoiled.

“Get away,” she muttered. “Keep your stinkin’ hands off of me.”

I stifled the laughter that rose in my throat. My stinking hands?

“Come on, Violetta,” Leticia said, pulling at my arm. “Talking won’t change her life. It’s a plaster on an abyss.”

Rejoining the crowd I felt almost pushed into the hall. I was far and away the tallest of the three of us, and I looked over the sea of heads, searching unsuccessfully for a gap in the solid mass of people where we could sit together. Surprised by the press of bodies, we climbed up to the gallery to try to find seats where, despite the cool weather outside, it was beastly hot.

I held the fur muff close against the malodorous steam of the galley. Inside the muff, dampening from the moisture of my hands, were the printed copies of my poem, The Rape of the Working Woman. I had intended to present a signed copy to Anita Whitney, imagining the rally to be like the ones I had attended in the past, twenty or so enthusiastic supporters surrounding a fiery speaker. But I, along with Leticia and Jacqueline, had been shunted far from the stage, even to a higher level, but with the fortune of being pushed to the very front of the balcony where I could look around the entire hall. I was unable to estimate the size of the crowd, but I could see it easily exceeded five hundred people. Every chair of row upon row below was full, and the gallery was filled with standing bodies, indiscreetly pushing upon one another for a view below.

An assistant to the speaker came to the podium, and the crowd murmured expectantly. Other assistants wearing large PLP badges edged around the room, quieting the crowd, and as one passed near the balcony, I quickly took my pamphlets of the poem from the muff and leaned as far over as I dared. A tall man below reached up, took my pamphlets, and passed them to the assistant. The assistant looked up at me, and I shouted, “For Anita!”

“Thank you, comrade,” he replied, and slipped them into his jacket pocket. A murmur of approval from the closest part of the crowd made me flush with pleasure, and I watched as the assistant slowly made his way back to the small stage where he placed the pamphlets on the podium.

“What on earth?” Leticia said.

Leticia shook her head. I had not warned my two good friends of my intentions for the very reason that I anticipated Leticia’s disapproval. I pressed my lips together to keep from saying more, but Jacqueline patted Leticia’s arm and whispered loudly in her ear. “Think how dull it would be without her.”