Can a football jock, cheerleader, stoner, techno-nerd, and lazy Bassett Hound come together and discover the mystery of The Haunted Brothel?

The Regent hotel is about to open as a ghost walk, packed with terrorizing special effects along with actors dressed as zombies, werewolves, and vampires. There’s only one problem. The Regent seems to really be haunted. That’s not a problem for a young group of ghost hunters. Nancy’s the group’s think tank and can solve mysteries in her sleep. If muscle is needed Tony is the young Adonis who’s not only into heavy lifting, but also a big hit with the ladies. Tina is a paranormal investigator who is into Tony almost as much as she’s into herself while their technician is a stoner with a Bassett Hound that can talk, though nobody else can hear his words. The Regent is their first assignment, and these young Paranormal Investigators will learn ghost hunting is scarier than it looks on television while they find out more about each other. 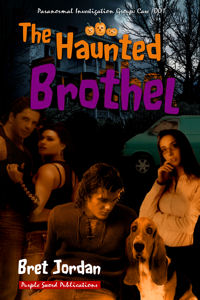 Dwayne stood next to the stairs as the group climbed up and left him behind. He didn’t mind. All this ghost stuff was stupid anyway. Dwayne only hung out with the group because he didn’t have anything better to do, plus the van was pretty cool, two tone green with Paranormal Investigations Group painted on the side in black. It looked like a good place to smoke a little weed if he could get a moment or two by himself. Hell, a green two-tone van was made just for that purpose.

He smiled and scratched Randy behind the ears. Most dogs liked that, but Randy didn’t seem to give a damn one way or the other. Lazy bastard. The dog had a lazy streak, but so did Dwayne. They had been together for two years, best of friends. Dwayne just wished everyone else could understand Randy as well as he could, though Randy didn’t seem to talk much when other people were around. Dwayne figured Randy had a shyness about him. Of course sometimes Dwayne had trouble understanding the Bassett Hound, too. The dog seemed to make the most sense when Dwayne smoked a joint or two, and mushroom tea turned the animal into a blabbering idiot who not only talked incessantly, but also wore strange outfits. Dwayne couldn’t ever figure where he got them from, and he only wore them when Dwayne drank mushroom tea. Maybe there was a connection. He would have to think on that.

Randy groaned as a dorky guy with a broom and bowl style haircut walked past. The fellow gave Dwayne a crooked smile, and he replied with a timid wave.

Mr. Krager called down from upstairs. The man cringed, tilted his head down to his feet and walked up the stairs and out of Dwayne’s line of sight. The stairs creaked under his weight.

Dwayne scratched Randy’s ears some more. “We’re gonna have to find out where that guy gets his hair done and make sure never to go there.”

Dwayne looked up and into the red eyes of a zombie. He screeched and tumbled backwards onto his butt. Randy groaned and squirmed as Dwayne’s leg fell over the dog’s back.

“Didn’t mean to scare you.” The zombie giggled as it stuck its hand out to help Dwayne to his feet.
Dwayne decided that this was no ordinary zombie. First of all, the thing had boobs, not a bad trait for a rotting undead creature and something that he could certainly work with. Secondly the zombie had a pretty smile, thick lips and beautifully white teeth, not the type that one would sink into the living’s neck...