The Haunted Man: A Novel

Power corrupts and absolute power corrupts absolutely; this is true under dictatorship, totalitarianism and fundamentalism, and democracy as well. Slavery, bondage, suppression and discrimination follow when absolute power corrupts. Perhaps, an Abraham Lincoln could legally put an end to the physical slavery, but its manifestation in various other forms related to race, including color and caste, culture, language, religion, nationality and political system remains a threat to man’s spirit of freedom. The nineteen month-long Emergency declared in India in 1975 would be relatively an insignificant event in the political history of the world’s largest democracy. But, when The Haunted Man, allegori-cally presents the agony of the people, gasping for breath under its heavy yoke, the subject gains universality. Through dozens of symbolic episodes and references picked up from the world of literature-scape, Alexander Raju’s novel unravels the severity of such physical and psychological suppressions of the helpless masses and, thereby, not only creates awareness among freedom-loving peoples but also tenders a warning to the whole world.

About the Author Born on April 1st, 1952, in Kerala State of India, Alexander Raju studied in St. Peter’s Primary School, Vazhoor, St. Paul’s High School, Vazhoor, St. Dominic’s College, Kanjirappally and Baselius College, Kottayam. He began his career as a freelance journalist as early as 1974, after completing his higher studies in the Universities of Kerala and Saugar, Madhya Pradesh. Touring almost every nook and corner of India, he acquired a firsthand knowledge of the Indian ways of life among various ethnic groups who differed totally in their culture, religion and language. When Sikkim became the twenty-second State of India, he joined the staff of Sikkim Express as one of its sub-editors and later became the editor of Bullet, a newsweekly published from Gangtok. He was one among the three-member team that launched Dainik Aawaz, the first Nepali News-daily of India. Returning to his native state of Kerala, he worked as a lawyer for a short while. In 1981, he joined the faculty of English at Baselius College, Kottayam, his own alma mater, as a lecturer. Since 1990, he has been serving as a registered Research Guide in Mahatma Gandhi University, Kerala, India. Currently he is Professor of English in Bahir Dar University, Ethiopia. Alexander Raju, an Indian English critic, poet, novelist and short story writer, has many books to his credit. Ripples and Pebbles (1989), Sprouts of Indignation (2003) and Magic Chasm (2007) are collections of his poems. His first novel The Haunted Man came out in 1997. Candles on the Altar (1985) and Many Faces of Adam (1991) are collections of his short stories. The Psycho-Social Interface in British Fiction (2000) is a critical work. 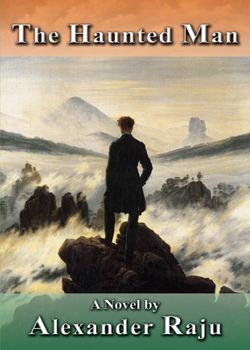 The Haunted Man: A Novel