Jo Cartwright is travelling to Tokyo without her ever-attentive husband. Persuaded to take advantage of her unexpected liberty, she accompanies her friends for a night out on the town.

A night out that ends in murder. Police Inspector Okitsu claims an open-and-shut case against a local man, suspected of being a serial killer. Sergeant Mitsu Ota disagrees. She knows the vengeful spirit Kuchisake-onna, the slit-mouthed woman, has returned.

Can Sergeant Ota stop Kuchisake-onna? Can she understand what motivates the spirit of the dead woman? Will she be able to save Jo? Whatever happens, Sergeant Ota is going to learn that the actions of a vengeance demon are nothing compared to the horror of domestic abuse and conforming to traditional values. 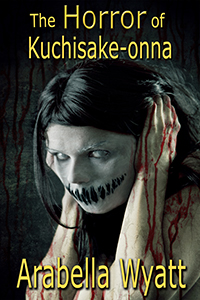 “Richard Cartwright, as you requested,” said Umeko to the darkened room as she ushered in their confused guest.

Cartwright glanced around, trying to discover what was going on. There seemed to be about five or six people in there, but in the gloom, it was impossible to say for sure. Heavy curtains covered not only the windows, but also the internal doors.

“Look, what is all this? I was told you know something of the disappearance of my wife, Jo,” he demanded petulantly. He coughed pointedly into his hand, showing he was an ill man, implicitly demanding to be treated as such. In truth, he had a minor head cold that had almost burnt itself out, but he was accustomed to exaggerating his symptoms to get his own way.

Even so, Cartwright was genuinely finding it difficult to breathe in the dark room. There was a haze in the air generated by the numerous candles and incense burners that covered every surface. He wasn’t usually sensitive to atmosphere or mood, yet he caught a whiff of fear. These people, underneath their stiff politeness, were frightened. No, more than that. They were terrified.

“Sit, please,” whispered the young, beautiful woman sitting cross-legged on the floor. Despite her youth, the others in the room moved with deference around her. “My name is Mitsu. I am the spirit guide on this journey.”

“What, you’re a medium?” demanded Cartwright, his lip curling.

Mitsu seemed unaware of the disdain. “If you find that word gives you understanding, then yes.” She threw some dried herbs on to the brazier, and a new, pungent smell filled the room. Strange smoke rose from the spluttering flames, creating a sickly fug. Twelve large, white candles were set out in a circle on the floor. Inside the circle, eight black candles burnt with a sullen, unnatural glare.

“Look, what am I doing here?” demanded Cartwright peevishly. “I was told that you know something about my wife, Jo. I should never have allowed her to travel without me. Who are you? How did your people know when I was arriving at the airport? Are you with the Japanese police? The hotel? The university? This woman explained nothing!” He glared at Umeko, who moved silently away and watched from the side of the room.

“We are none of those, Mr Cartwright,” replied Mitsu, carefully observing the man through the spluttering curtain of smoke. A blusterer. A man full of his own illusory importance. A small man who tried to make himself bigger by calling on authority and by belittling others, if he dared to do so. The perfect man. Kuchisake-onna had chosen true to type. Poor, broken creature that she was.

Mitsu jerked as supernatural power surged through her terrified body. “She approaches, our time is short,” she croaked. “We must begin.”

“She? You mean Jo is coming here? Where is she?”

“Not Jo. Jo is gone. The one who took her approaches.”

“You mean she’s been kidnapped?” exclaimed Cartwright, the shock covering his usual whining tone. “Have the police been informed?”

“Not kidnapped. Gone. The police cannot deal with this. Their power is secular. This lies behind the veil that separates the worlds.” Mitsu observed Cartwright nervously touching the small cross at his neck. “That will not help you here, not now, not ever.”

“What? What do you mean? Where is she? What do you know?” demanded Cartwright, his voice getting higher in fear. Even his habitual self-absorption couldn’t ignore the rigid faces of the Japanese around him, the way they glanced continually around the dark room, needing to know what was behind them, yet terrified to find out.

He gasped in astonishment as Mitsu’s eyes rolled back into her head and the voice of his wife, Jo Cartwright, emerged from the terrified mouth of the Japanese woman, sounding faraway yet getting stronger, as though moving nearer, as she recounted her final memories.