Sam Aushumness, sixteen, orphan and high school outcast, meets his long-lost aunt at his parents’ funeral—or the woman he thinks is his aunt. It turns out that she isn’t his aunt, isn’t from around here, and isn’t even from this galaxy.

It seems the person masquerading as his aunt is a refugee from a faraway world, and she’s being pursued by a small band of mercenaries who have been hired to bring her back dead or alive—preferably dead.

Secrets have to be kept, and only Sam and his girlfriend, Kym Kim, know who Aunty Aushumness—nickname Aunty Awesomesauce—really is.

However, the secret soon gets out, and soon the mercenaries, the police, and every branch of the government are on the hunt to find Aunty Awesomesauce, what she knows, and what secrets she carries.

Aunty A, though, isn’t one to back down from a fight, and when push comes to shove, the mercenaries find out how bad she can be. 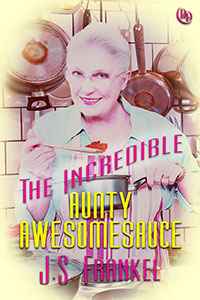 The day was warm, and sweat streamed down the back of my neck, causing it to itch. I scratched away the offending water and returned my gaze to the coffins. Plain wooden boxes, they housed the bodies of my parents, both the victims of a senseless drunk who’d decided he was ready for the road instead of getting ready for a nap.

Jesus, what was wrong with people, anyway? That was my immediate thought as I swept my gaze around the area. The kids at my school couldn’t be bothered to show up. Only Kym, whom I’d known for the past two years and who stood at my side crying silent tears, had come.

Her parents were also there, her mother short and slender, and her father, medium height and slim. Both of them wore black, as did Kym. They’d come with their daughter, maybe out of respect, or maybe out of duty. We didn’t talk about the whys. They’d shown, and that was enough.

No one else showed, though, save a stocky woman standing near the exit of the cemetery. With her hair tied up in a bun and a round body that resembled a beach ball, she wore a rumpled frock and looked to be in her forties, maybe older. It was impossible to tell. Perhaps she was lost, but after catching sight of her, my thoughts turned inward, and they were ones of rage as well as despair.

Class spirit? Getting the feels for someone who’d suffered loss in their lives? Make me laugh…not. When something bad happened to them, it was hey-can-we-talk and all that, but when it happened to me, sorry, kthanksbye. I could rage all I wanted, but in the end, they didn’t give a crap, and I stood alone. That’s how it was and how it always would be.

The minister, a tall, wizened man who had to be over eighty, started in on the prayers and all I could do was stare at the holes in front of me, wishing things could be different, but also knowing they never could be. Death had come. It had taken its fill for now and left me behind…

Sixteen now, ready to enter my junior year this coming September, things had been going as planned, homework done, I’d been chilling at home while my parents were preparing to go on a food-shopping run. My mother, short and dark-haired with a pleasant face and kind manner, had asked me if I’d wanted anything. “Pizza’s good,” I’d answered. Pizza always made things better.

She’d mimed writing something down. “Then it’s pizza. Anything else?”

Right away, I got the message. Any time she’d ever done the mime getting-the-pizza thing, I knew she wouldn’t get it, but it was a game we’d played since I was small. Sometimes she’d surprise me. Usually she wouldn’t, but it never bothered me. All that mattered was she was there for me.

My father, tall, slender, with a head of close-cropped blond hair, opened the door, his lean, almost hatchet-like face wearing a smile. People said I looked like him and after assessing my face in the mirror, yeah, they’d been right.

I was short for my age, five-seven, skinny at around one-fifty, with the same pale gray eyes and blond hair. I never saw anything special in how I looked, but whatever. Kym, my girlfriend, had seen something in me. That was what counted.

On the short side of five-one, a little chubby, she had a mane of long, black, silky hair that cascaded around her round, pretty face. Some people commented that she looked like a doll.

To me, though, she resembled the pop idols she was into—idols meaning Korean pop music idols. We were talking big-time into. She was Korean in descent, after all, although she’d been born in Chicago. She liked to say Korean girls were special. I didn’t know about anyone else, but I thought she was hot.

We’d met during my freshman year at Lakeview High School, a small school located at the edge of the city, twenty minutes away from my house on foot. It boasted a small park nearby with a forest, a beautiful view, and a student body that prided itself on ignoring people like me, people who never fit in.

Terminally shy and unsure of what to do or say, I’d gone through school life without making many friends, and my first year at Lakeview had been no different—except for Kym. I’d wandered around homeroom just before nine while the other students had staked out their seats. As always, I wondered if anyone would ever speak to me. A surreptitious glance told me everyone had already paired off.

Two seats were left at the back of the class, near the window. I took one, and then a short, chubby girl slid in beside me. Our teacher read out the roll call, and while he went through the names, she leaned over and whispered, “My name is Kym. It’s with a y and not with a small I, okay?”

Not the smartest question around, but she didn’t seem to be offended. “Yeah, it’s Kim.”

It took a few seconds to register. “Your name is Kym Kim?”

“Kym…Kim,” the teacher intoned, and the class broke up laughing.

Kym’s mouth tightened, but she stuck her hand up. “Here.”

Some members of the class continued to titter while the teacher ran down the list. Kym, now stone-faced, probably due to embarrassment, related the rest of her story in a harsh whisper.