Blending history, art and fiction, THE INVENTOR is an ode to secular humanism and a searing condemnation of religious and political sophistry. Multi-layered, this story-within-a-story revisits crimes committed in the name of God. It also resurrects a largely unknown, sadly neglected medieval painter who, reaching beyond the grave, can now show his face, belie his critics and put an end to speculations about the insights, passions and ordeals that inspired his art. Capturing the horrors his eyes have seen and foreshadowing the upheavals that would rock the world, filled with blistering commentaries on life, free thought, human bestiality and the death of reason, his allegories, now five centuries old, denounce the despotism of absurd beliefs and satirize the pointless circularity of the human condition.
“Painting is another way of keeping a diary,” Pablo Picasso once said. THE INVENTOR agitates against false prophets who, to ensnare men’s souls, fill their heads with mind-boggling lies and often resort to violence to achieve their objectives. In so doing, it also offers another way of prying into a diary’s most scandalous secrets.

About the Author:
Born in Paris, educated in France, Romania and Israel, W. E. Gutman is a widely published veteran journalist. Between 1991 and 2006, he covered politics, the military, human rights and other socio-economic issues in Central America. Formerly the international editor of the futurist New York-based magazine, OMNI, and U.S. editor of the Moscow-based magazine, Science in the USSR, he continues to write for a number of mainstream and special-interest publications. A self-described iconoclast, devout atheist and Freemason, he lives with his wife in Southern California’s “high desert.” 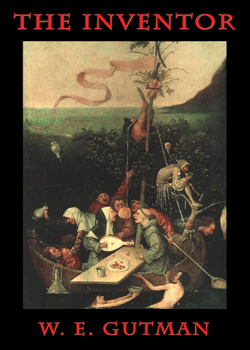