When American pilot, Steve McKenna is murdered, he takes with him secrets about an international crime ring. Secrets that he only reveals to his friend, Cullen Danes.

An investigator for the British Aviation Ministry, Cullen is determined to find his friend’s killer, but his life is in danger when the crime ring’s operatives learn he knows secrets that can expose them. Cullen’s rescuer is a woman whom he meets at the International Aviation Convention, Nina Holt. She proves to save his life in more ways than one and together, they uncover a labyrinth of illicit activities that involves government officials, bank executives and global industrialists.

Nina and Cullen’s true test comes when he asks her to take a leap of faith. Torn between jumping into the unknown or remaining with her family, Nina has to decide whether to take the biggest risk of her life. That is if the King Maker does not have them killed. 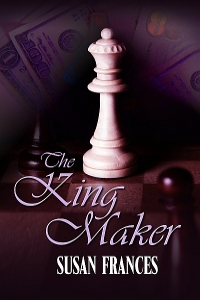 He put his hands on her shoulder and turned her to face him. "I don't want to take any risks with your life in case they decide to go after you too. They know that I spoke to a man from Scotland Yard, and if they can find that information, they can find you, unless you're experienced at evading mercenaries."

She shook her head. She had no idea what was going on, but she understood that if she wanted to live, she was going to have to trust Cullen with her life.

"All I know about those two guys is they have no reservations about killing anyone they believe is a threat to their organization."

"What do they want with you?"

"About what my friend Steve McKenna knew. He learned about their illicit operation and he revealed everything he knew in his last correspondence to me. He knows the guy who is behind it, and I want to bring that bastard to justice."

She tried to wrap her head around what Cullen was saying. Her loss of speech caused him to slow down a notch and stare at her. The arresting glint in his eyes sent chills down her spine as if he was memorizing every square inch of her face. She liked the intensity she saw. If she never saw him again, she wanted to remember him just the way he looked now. "What are we going to do?"