It is said life only brings you one great love. Not everything they say is true.

Bethina Lydia Fortescue, the Lady Godwin, adored her king as no other for twenty years. But the king is dead, and as his mere mistress she is no longer welcome at court.

Sir Arthur Jeffries, newly appointed to Princess Meredith's Regency Council, needs help. He begs the legendary Lady Godwin to return to the palace as the princess' tutor, hopefully to lead the gawky teenager through the political and romantic minefield of suitors and hidden assassins invited to attend her sixteenth birthday ball.

Brought together as servants to Rushton's crown, but joined through a lifetime of bitter and shrewd experiences, Bethina and Arthur discover that when the princess takes a husband, they will have only one thing left to live for: love. 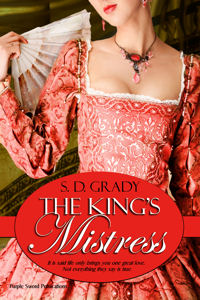 She fought against a tear. That was all in the past. Gone.

She closed her eyes so she might ignore the overly familiar oil landscape hung over her bed and the other tiny details that recalled the sweet and torrid memories. Her finger caught at a lace ribbon on the vanity top and pulled it across the polished wood surface. Her favorite clock ticked. Time passed. When would the hole in her heart heal? Anger at her weakness surged. She grabbed and held onto it.

"Stop being morbid, Beth. You've got a job to do." Her voice echoed in the vaulted room.

A knock sounded from the outer chamber. She still had an hour before she expected her first guest. The tweeny scurried to answer it.

"She's not quite decent, sir."

Bethina grinned. Leave it to the young ones to state the truth. She stood and turned to welcome whoever it might be, calling out, "Let them in, Laurel. I'm as decent as I'm going to get." It took but a few steps to enter the sitting room.

The girl curtsied and opened the door wider. Sir Arthur stood in the hall, his cap in his hand and eyes wide as he noticed the extravagance of her chamber. Once again, that phantom emotion sprang to life. She couldn't possibly take another lover. Never. Action would help to stifle her misgivings.

"Come. Come." She gestured him into the room. "It's been far too long since these rooms saw a gentleman not bent on nefarious deeds."

The man blushed, his grey eyes darkened. "You think me harmless, Lady Godwin?"

"Hah!" She strode to the chaise, settled down and reached for the bell. The tweeny reappeared. "What would you like to drink, sir?"

Dressed in a suit of black silk from head to foot, the diplomat evoked an aura of quiet power. He had not moved since pausing inside her threshold. "I like to keep my wits when dining with my enemies and my friends."

Bethina pressed her lips together before ordering, "Small ale for two." He remained still, his gaze boring into hers. "Do you possess a more modest gown, Lady Godwin?"

She chuckled and leaned forward just a touch. "Unlike you, Sir Arthur, it is not to my advantage to fade into background. A low cut bodice is far more effective in eliciting confidences than sitting near silent in a corner with a shawl up to my chin." Even as she grinned, her melancholy vanished. Thank goodness she had somebody to match wits with.

He coughed and appeared to decide she was not about to eat him for lunch. He stretched his long legs out as he settled in the high-backed chair opposite her perch. He continued to study her. What did he want?

"Now, why the early arrival for supper?"

He turned his attention to the appointments of the chamber; the heavy furniture, damask curtains, oil paintings. Every feminine furbelow Trudy could gather dotted all possible surfaces. Lace, china, clocks, jewelry. It appeared as the room of a very wealthy lady of the nobility. No guest could possibly guess at her sordid past.

"Hmm? Oh, yes. Sorry. I wondered if you required any more information before we go in for supper this evening?"

"No, I think not. Sometimes it is better to make your own judgments, true?"

He rubbed his palms together for a moment. "I would have to agree with that."

So, he was avoiding speaking his mind. Really, now was not the time to keep secrets from her.

Laurel appeared with their drinks, served and withdrew.

Perhaps if she taunted him.

Bethina ran one finger along the rim of her glass, collecting the drop of moisture sitting there and then licked it dry. "You really wanted to see what I had chosen to wear. Admit it. What would the famed mistress of King Frederyk do upon her return to court?" She sipped at her ale and decided the castle boasted a fine master brewer.

"Yes. I am taking a huge risk here. Should we misstep, I shall be back in the desert of Ueil and you in that house on the river."

"But you forget, Sir Arthur." She placed her glass on the small table at her right and drew a heart on the tabletop from the glass's condensation. "Not once in two decades was I dismissed from court. I am good at this."

He smiled and relaxed in his seat. "As am I."

She met his steady gaze. Good. His defenses were coming down. She took a deep breath, her breasts pressing against her tight bodice. His grey eyes widened. He swallowed. She followed his Adam's apple down his muscled neck and grinned in appreciation at his wide shoulders. The years had been kind to him. The blood beat in her ears. Her body stirred.

And suddenly it became clear. He desired her. As much as she wanted him.

"I didn't come here for a flirtation." Her protest sounded gravelly.

His cheeks blazed with color. "I did not invite you for such."

She waited, as he appeared to want to say more. In the end, they simply shared a nod each understood. The heat and lust would wait, for now. "I am here for Freddie's niece. She needs me."

He nodded. "Yes, she does. I think, though, that I will enjoy working alongside you."