The Life Not Lived

We all have those moments in our lives we wish we could take back. Natasha has come to regret the choices she has made in her life, the biggest one being turning away from the one woman she had ever loved. But thanks to a late night visit from a succubus and a magical diary that found its way into her life, she can have a second chance. If she’s willing to take a leap of faith... 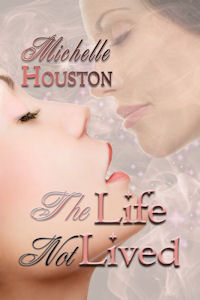 The Life Not Lived

With sure, purposeful strides, Natasha crossed the bedroom to the closet and pulled open the door. Digging around behind her shoe shelf, she found the old diary that she’d discovered a few months before and pulled it out. Several quick steps took her from the closet to the bed, where she flopped onto the soft suede comforter. Pulling the key out of her pocket, she opened the leather-bound cover and looked at the first entry.

The woman had painstakingly detailed everything, from her heartache of finding a way to reunite with her lost love, to their eventual happiness thanks to the mysterious gift of the diary. The only passage that was underlined was the warning that the universe demands balance. For all that the diary made possible to have, it also asked something in return.

That, at least, Natasha could understand. The universe requires balance. Basic principles, thermodynamics and all of that—balance even as it spins to chaos.

The one who made the request had to make a leap of blind faith, trusting they wouldn’t be giving up more than they were getting. Although some part of her still questioned if it would work, she had to give it a try. If there was some way, some truth to the magic, it was worth looking the fool. After all, only she would know. If it didn’t work, her entry could easily be ripped out.

Taking a deep breath, she flipped to the middle where the diary sat empty—waiting. Clasping her pen so tightly her knuckles were white, she wrote:

I never knew what to think about the entries in this book. I didn’t know if the previous owners were all nuts, or if someone with too much time on their hands wrote this whole thing, trying to make it seem legit.

I hadn’t intended to add my own entry. In fact, I never intended to do anything other than enjoy the whimsy of this book, then try to find someone who wanted it. After all, I never believed in anything that science could not reasonably speculate existed, especially not a diary that could grant the heart’s deepest desire—until three weeks ago. I also never believed in second chances.

Until several months ago, if you had asked me, I would have said my life was perfect. I was content with my husband, both of us professors of science at the University. College sweethearts and colleagues, as well as friends. Then he dropped a bombshell on me—he wanted a divorce. He had found someone else, someone who loved him, and whom he felt destined to be with. I guess I should have seen it coming; after all, how late can you really stay with a grad student grading papers? But I told myself I was okay with his indiscretions, that I welcomed them, in fact. Sadly, it’s true. In my heart I have lusted, regretted past chances that I never took, and betrayed my husband with my longings for what could have been. The passion between us had long since slipped into what had been.

I never knew how deep the regret went, however, until three weeks ago, when the package arrived. Now I find myself about to make a wish upon the diary, and I hope that I don’t come to regret the consequences—and what I will be giving up.

Although I believe in my heart that if I can turn back time and do things all over again, that it will be worth whatever payment is required to keep balance, I admit—I am afraid. After more of the unlived life at this point, but still afraid.

I also hope that I am not fooling myself into believing that the past entry writers lived happily ever after once their wish was granted.