After spending seventeen months on Space Station Pluto, Ensign Shawn Michael MacTavish returned home to discover his wife, Lorelei Lunar, had been murdered. The guilty person was none other than Basil T. Huntington, who was a power unto himself. The people of one of his twelve planets stated he was on their world when Shawn Michael’s wife was being murdered. Facing an airtight alibi like that, how can MacTavish prove Huntington is guilty? Also, how can MacTavish stay alive when someone keeps trying to kill him? His problem is twofold, how to solve his wife’s murder and how to keep from being murdered. 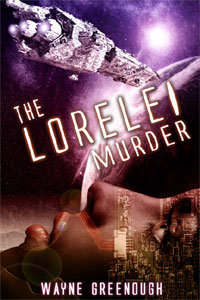 “Well, Shawn Michael MacTavish, saw you blast off from the Academy and followed you here,” said Gatano, as he jerked Shawn Michael’s blaster from its holster. “And now we have you in our gun sights.”

“Who are you, mister? What do you want?”

“Names aren’t important. As to what we want, why your life, what else? Now march into the dunes. You, Shawn Michael are going to walk into the desert a short distance, take your blaster pistol from its holster and commit suicide.”

The situation was desperate. He had to keep the assassin talking. “Who hired you to kill me?”

“Nobody is going to kill you. I said you were committing suicide. Besides, what makes you think somebody hired me? Maybe I thought of this myself.”

Shawn Michael saw an opportunity to make a break for it, or at least go down fighting. If he could just get the thug to gun prod his back maybe he could whirl around, jerk the blaster from his hand, and fight his way out of the trap. It was a big if. What about the prodder’s four silent partners? Would his sudden move catch them off guard? Well, here goes nothing, time for an insulting comment.

“You had a thought? Don’t make me laugh. By your appearance you’re nothing but a brainless Neanderthal. Hell, a filthy space rat like you wouldn’t have brains enough to dodge oncoming asteroids unless you were told to do so by somebody who had more than an odd lump on his shoulders.”

Gatano yelled and jabbed him in the back. Shawn Michael twisted around, grabbed for Gatano’s blaster…