The Magic Aquifer: Treating the Political Stress Syndrome, A Novel

Dave Olson worked during his vacation from college for a Canadian and a U.S. copper mining company which hired him to gather soil samples for copper in the northern wilderness areas of Canada and the United States. Then one evening, while bathing in a refreshing stream, he found several nugget shaped rocks that looked like gold and hid them for safekeeping. And although it was highly unlikely they were gold, they sure looked like gold even though gold was seldom found in this part of the country. The following morning, four defiant Indians methodically trashed his campsite, telling him in no uncertain terms to leave immediately, or risk not leaving at all. Needless to say, he took their advice, but later found out that those shiny nuggets were not only pure gold but they netted him close to one thousand dollars. The following summer Dave and two of his closest friends, Ed Nelson and Bill Warner, decided to try and find more gold, and after numerous mind-boggling experiences they found what turned out to be an astonishing fortune in nuggets and gold flakes. Then after much soul searching, they decided to establish a non-profit foundation to benefit humanity, in direct opposition to the powerful one percent of today’s profit seeking International Oligarchies and their corrupt group of Plutocrats that currently comprise the nemesis of our Democracy.

About the Author:
John R. Krismer, MHA-LFACHE has published five nonfiction and fiction manuscripts and is the founder and CEO of Health Systems Institute, which provided research, education and consulting for governments, hospitals, and clinics in both Canada and the United States. In his research, he has conducted hundreds of educational institutes while serving as the principal investigator involving five major universities in researching today’s vitally important health record database. He has also served as CEO of several major hospitals and corporations, and as a board member of two health insurance companies, and is often referred to as a visionary ahead of his time. 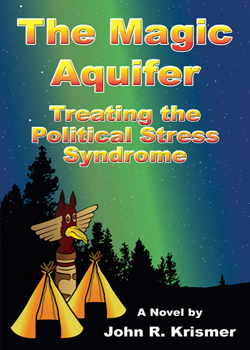 The Magic Aquifer: Treating the Political Stress Syndrome, A Novel