Parenting is one of the most difficult jobs in the world. How do you cope with a willful child? When Albert and Emiline Rutherford try to discipline their daughter Dorothy, things get worse as Dorothy turns to her imaginary friend The May Moose for support. Together Dorothy and The May Moose plan Dorothy's future and it is only when Albert Rutherford returns home after the Second World War that he makes a horrific discovery. 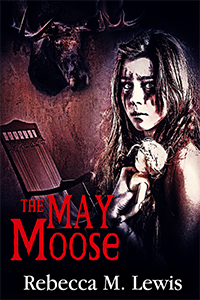 “Dorothy! What are you doing?” Emiline Rutherford's voice was shrill. She rushed through the double glass doors from the morning room out into the garden. Dorothy was sitting on a checked blanket on the grass, and Emiline began to relax.

“Oh! There you are! Good girl! I'll just fetch my gloves and we'll go.” Emiline turned and went back into the house.

Dorothy's mind drifted as she fidgeted in her chair. It was hard and uncomfortable—she needed another cushion. I'll ask for one in a minute, but as soon as she thought it, her mind drifted from 2001 and her hospital room back to the warm July afternoon of 1927, when she'd been six years old and still loved. It had been a lazy afternoon. There was a cricket match being played off in the distance. Every so often there was a loud crack as the ball hit the wooden bat and then applause as a run was scored. Now who won? I can't remember, and Father talked about it for days after. It was too hot. Her raven ringlets had hung down, making her neck sweat, and she would have loved to kick off her white socks and shoes, but Mother would never let her do that. I was wearing my best Sunday dress. Mother had doubtlessly gone inside to check her own appearance before we set off. She was always preening. They were going to tea at the Mayton's. May Mayton was Emiline's closest friend, but her name, May Mayton, made Dorothy laugh.

“It sounds like people are stuttering when they say her name,” she’d told her mother.

The first time I heard it, I laughed until I got the hiccups, and both Mother and May had been beside themselves with indignation. She chuckled.

Her bottom began to ache and momentarily her thoughts returned to the present. She reached for the cord and pressed the bell, keeping her thumb on it until someone came.

“What now, Miss Rutherford? What do you need now?” Nurse Evans was young, in her mid-twenties, attractive but cold. She sounded irritated at having been disturbed, but as she stood in front of Dorothy, keeping her distance, she tried to avoid eye contact.

“Of course! Could I have another cushion please?” Nurse corrected her in a voice more apt for speaking to a naughty child than an old lady, but she pulled a bunch of keys from her pocket. She took out an extra pillow, then not forgetting to lock the wardrobe again, she dropped the keys back into her pocket and slowly went over to Dorothy.

Dorothy watched Nurse come closer and didn't take her focus off her. Head down, she looked at the young woman over the top of her glasses. Her face was expressionless, her eyes unblinking. She could feel the nurse's unease, could almost smell her discomfort. It excited her.

“Where do you need it, Miss Rutherford, behind your back?”

Nurse flinched and Dorothy chuckled quietly to herself. It doesn't take much to ruffle miss Haughty Taughty's feathers, does it? She chuckled again a little louder.

“Can you lean forward or stand then? I'll push it underneath you.” Nurse had beads of sweat on her forehead.

Dorothy leaned forward enough to allow Nurse to push the cushion under her bottom. She was creaky and slow, but it wasn't hard for her to stand. Just the same, she thought she'd have a bit of fun.

“Ouch! Careful!” she yelled suddenly and closed her wrinkled bony hand around Nurse's wrist, grasping it tightly until the skin went white.

Nurse gasped and jumped backward, pulling her arm in an attempt to get away. Dorothy let her go and Nurse Evans turned and fled from the room. Dorothy chuckled again and then roared out a loud hysterical blast of laughter that must have followed the nurse down the corridor back to the staff kitchen.

Dorothy wriggled back into her cushion and settled more comfortably. She turned her head to the window and looked out onto the perfect lawns and flower beds. Rain spattered her window, blurring her vision, but it didn't matter. As she stared out she no longer saw the lawns of her home and prison, Norton Hall Psychiatric Hospital. She was back on the lawn of her parents' house in Derbyshire, a little girl, waiting to call on friends with her mother.