Jack Youngblood is a ghoul. That's what his friends call him. More comfortable in the morgue than the coffee shop, Jack is San Diego's Chief Medical Examiner. Dead bodies are his business. A twice-divorced recovering alcoholic, Jack hasn't had a date since he's been sober. His only commitment is to his work; his only love is Lilly the lab who shares his home.

When red-haired, green-eyed Jill Hanraty, a Forensic Investigator, joins his department, Jack falls for her like a mountain climber losing his grip. Together they investigate a pair of baffling homicides. Jill becomes more than Jack's colleaguemore than a friend. Until she betrays him.

Part love story, part forensic police procedural, this fast-paced novel is full of chases, plot twists, a dramatic climax, and an on-again, off-again romance as mysterious as the murder investigations themselves. 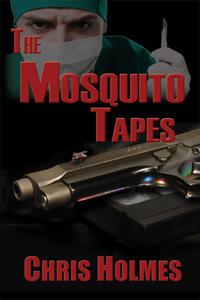 As a big mystery fan, this story definitely helped to feed my addiction. I thoroughly enjoyed not only the story, but the originality of it.

Dr. Jack Youngblood works with the dead. Preferring to work with the dead rather than the living, he considers himself a loner. He lives alone with his dog, Lilly. When Jack does an autopsy on one man and realizes he was murdered, he starts to investigate. Not long after, another person winds up dead. This one looks like a hit and run. Both deaths look suspicious and Jack soon realizes that they are connected.

Having read many mystery/suspense books with similar story plots, I found this particular plot very refreshing. What I also loved was the make-up of the main characters. I felt that Chris Holmes allowed his readers the opportunity to really get to know his characters and fall in love with them. I felt as though I was right there with Jack as he performed his autopsies and with Jill as she faced some very dangerous men.

I would recommend this story to any mystery/suspense lovers. This story also has a lot of information about forensic pathology, which is Jack's career, so if this is of interest to anyone, then this book is for you as well!

"Nobody tells a bio-terror story better than Chris Holmes. Just nobody. And like all of Chris' books, this one begins well, when San Diego County Chief Medical Examiner Jack Youngblood discovers a strange mosquito in the pocket of a murder victim. Taut, tingly, and downright scary, The Mosquito Tapes will keep you reading well into the night. But best be wary: Spray yourself with Deet and have a fly swatter nearby."

Betrayals by the ones you love the most are the ones that hurt the most. "The Mosquito Tapes" is a blend of science, crime, dead bodies, and romance into an entertaining story. Jack Youngblood is a man whose spent more nights with cold corpses than warm women recently, but when a new detective shows up in his precinct, things change. But all is not as simple as can be for Jack. "The Mosquito Tapes" is a fine read that'll keep readers riveted 'til the very end.

The Mosquito Tapes causes even the most casual reader, to pick up the book and read the back of it, just because of the intriguing cover art. The gripping story, told with some humor and great forensic detail, moves along nicely. The author offers up interesting characters, which he builds with vivid detail and a story with unpredictable twists and turns. The plot builds with increasing intensity and just when you think you have the ending figured out, the tale takes a turn in another direction.

Having read literally hundreds of mystery and suspense novels, I found this plot very invigorating. Holmes allows us to really get to know his characters and to cheer them on or gasp when they make a mistake.

I highly recommend this book for all mystery/suspense fans and for anyone wanting an entertaining, fast paced read.

The case was like a toothache, a nagging pain that wouldn't go away and wouldn't get better. Adding to the discomfort was the sense the case was somehow linked to Biologistics and its secret research. But that was only a hunchI couldn't prove anything. Had no solid evidence to back it up. Just mosquitoes, blue fibers, and gut feelings.

But I had great faith in my forensic investigators and was confident sooner or later they would turn up something that would break the case wide open. They'd never failed me before.

In the meantime, I assuaged my frustration with romance.

Jill and I were at the can't-keep-hands-off-each-other phase. Past the guarded feelings but not yet to the point where a commitment must be made or the relationship withers. That fork lurked in our future. But for now, we were still caught up in the whirlwind, the newness of each other.

Even when I wasn't actually with her, she was on my mind, and I found myself thinking about her almost every waking moment, especially at night against a bunched up pillow, keeping the gap-toothed redhead in the morgue at bay. It was clear to anyone with eyes that I was falling more and more in love with the woman, in a hopeless tailspin over her.

One evening when I was home alone, Lilly came over to my chair and began licking my hand. She hadn't gotten much attention from me lately and needed some now. When I reached down to pet her, she rolled over for her customary belly rub.

She ignored my clichs of torment, rolled her head to one side, and lolled out her tongue.