The Music of Bodies

THE MUSIC OF BODIES Can a blind man also be a voyeur? In the realm of memories and the imagination he can, drawing exquisite images of skin, bodies and forbidden parts with an anatomical but tender precision. But is the experience as good as reality or maybe even better?

THE RISE AND FALL OF THE BURLESQUE EMPIRE An involuntary time-traveller lands in Time Square in New York in the 1950s and comes across a seductive young woman in a burlesque show only to lose her. He returns at several years' interval as the Manhattan vice landscape tuns even more sordid. Is his love affair doomed to repeat itself and fail again?

THE TALE OF THE DROWNING MAN In ancient India a young man falls head over heels in love with an unattainable young woman and spies her bathing nude in the river from far away. How one of the legendary sexual positions in the famed Kama Sutra was involuntarily created!

G IS FOR GYPSY From one side of the partition, a man in a hotel room listens to a couple in the next room noisily make love. The memories this evokes are most troubling and the temptations of sex take him onto the Internet as he arranges a dangerous encounter of his own as a form of penance.

TAKE ME TO CARNEVALE A couple's relationship is slowly disintegrating and they journey to Venice in an attempt to save it. When they meet a mysterious older man who invites them to an unusual party at Carnival time, their whole world is turned upside down and they find themselves involved in a world of sex they had not previously even imagined.

THAT TIME WITH SARAH JANE Sarah Jane is submissive in her relationships with men. She is seeking a Master and will do anything to achieve her purposes. As the sexual encounters she finds herself drawn towards become ever more extreme and painful, she reaches a point where a fatal decision must be taken. Will she emerge on the other side of sanity and happiness? 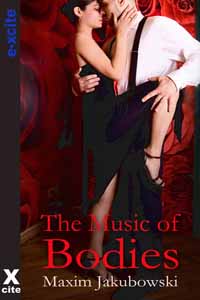 The Music of Bodies

The strippers, all stark naked, walked on to the stage and gradually moved down into the auditorium and began making their way across the rows where us male spectators were sitting. Invisible signals passed between the erstwhile dancers and some of the men in the audience, and after a few bank notes had changed hands, some of the girls would rub themselves against the generous customers. I caught a glimpse of hands caressing flesh, straying, moans, movement, whispers. I declined the untold offers of the first few dancers who reached me and waited for Anais. I tried to see where she was, which men she had stopped to attend, gratify or whether she was part of this unholy procession. She was. Two rows away from me, she had her back to one fat punter, his hands unmistakably running across the bare skin of her backside, no doubt kneading, intruding. Her eyes and mine met across the chiaroscuro of the strip club.
I waited. Turning down all the other strippers.
Finally, she reached me.
I handed her the first note I found in my pocket. Neither of us even checked its denomination.
She pressed her breasts against me.
“I saw you when your name was Anais,” I whispered to her.
Her eyes came to life.
“That was a long time ago,” she answered.
“I know,” I sighed.
“You can touch me, you know,” she said. I thought I could detect a faint foreign accent.
My hands moved to her shoulders. I could feel her breath in my ear. Her softness was like a sting. I closed my eyes and abandoned myself to the blissful sensation. One of her hands brushed against the front of my trousers. I was hard.
“I’ve been thinking of you ever since that first time,” I said. “You are beautiful.” All I could come up with was a damn cliché!
She indicated she had to move on. My time was up; there were other men further down the row.
I was about to say ‘no...’ when she whispered “I am available, you know.”