Still young and vibrant, Michaela has sworn off ever loving another man after her divorce, but could Will, her dangerously sexy lawyer, be just the man to help her move on? Can Will convince her not to just give him her body...but her heart? Can their passion bear the naked truth? 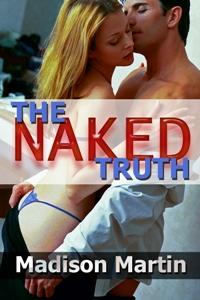 Excerpt:
“I don’t like goodbyes.”
Standing before me while I sat on the edge of his living room chair, Will took my face in his hands and made me a promise. “It’s not goodbye. I won’t be gone that long.”
“Two weeks feels like forever.”
I slid my dress off my body and reached for him, determined to get him out of his shirt and pants as fast as I could. I wanted his hard body on top of me, my hands all over him. I wanted his work clothes off and him deep inside me before he left. I’d never get my fill of him, but at least for the next few hours, he was mine, and I could try.
“You think this’ll be easy for me?” he asked, his eyes fixed on me while he undid his tie and tossed it on the coffee table.
I stood up and pulled him closer. I bit my lower lip. “It won’t?”
“It’s going to kill me.”
He leaned down to kiss me but I lowered my head, bent on my efforts to get him undressed. My fingers undid the buttons of his shirt, and his eyes grew hazy while he watched me strip it off. I ran my hands down his chest, savoring the feel of the smooth, hard muscles, my fingers roaming into the indentations between them. As I unbuckled his belt, Will’s hands worked their way down my belly and over my hips.
I liked the clean, masculine smell of him, and after I’d gotten him naked, I liked the feel of his skin under my hands. I liked that tonight, he was mine, no matter where he planned to go in the morning.
“Will you be with anyone else while you’re in New York?” I asked.
His hands splayed through my hair and his green-gray eyes met mine. “No.” He was a serious guy, but I’d never seen such a serious look on his face before. “Will you wait for me?”
I nodded.
In the months we’d been together, we hadn’t been apart more than a few days, and I didn’t know how I’d make it.
My hands exploring the soft skin of his shoulders excited me, and I traced my finger over the rough trace of stubble on his jaw. I loved this masculine part of him. I loved kissing his throat and licking the pulse at the base of it, so I did.
He responded by pushing my hair aside with one hand and burying his face in the crook of my neck. His mouth there made me shiver.
“When we first met, I never thought you’d fuck me,” he said.
“No?” I asked.
“Nah. You had all that other stuff going on. Thought I was the last thing on your mind.”
“But you still wanted me to.”
“Yeah. Didn’t think you liked me, though. Not like that.”
“So you…thought about me? Before we were together?”
“Every minute.”
I reached down and touched him. He was hard, and I loved the feel of his cock in my hand. I stroked up and down, and when his mouth met mine, I felt him pulse in my palm.
“Did you ever touch yourself thinking about me?” I murmured, my mouth grazing over his.
He stifled a groan as my fingers stroked him. “Yeah.”
I loved the rough sound of his voice when I excited him. He was always so focused, so in control. I loved that about him, but I wanted to see if I could make him lose it.
“When we fucked that first time, was it as good as it was in your mind?” I asked.
“Better.”