The New World Oligarchy: Destroying the United States Through Globalization A Novel

Doctor Bill Warner and Nurse Mary Swanson portray two real life healthcare professionals who tried to stop the pervasive takeover of our country and the deregulation of their professional healthcare standards. And by fighting this disparity in their service to humankind, they inadvertently placed their families’ and their own lives at risk. Eventually they realized this problem was promoted by a very wealthy international Oligarchy, which had coerced this country’s politicians into passing the 1946 McCarran Ferguson Act, which deregulated and decentralized FDR’s once world-renowned community rated healthcare prepayment system, immediately following FDR’s death. At a meeting with former President Gerald Ford, Dr. Warner was told the healthcare system would have to collapse before today’s dysfunctional Congress would ever give up their gifts and benefits from this shadow government. They also learned this Oligarchy protects their vast fortune of gold bullion in the Swiss Illuminati Bank of Rome, all acquired from their many wars, political scams, and acquisition of natural resources. Yes, this novel is based on actual events, which should motivate every American to become involved ─ for this time we have no place to run!

About the Author:
John R. Krismer, MHA-LFACHE has published five nonfiction and fiction manuscripts and is the founder and CEO of Health Systems Institute, which provided research, education and consulting for governments, hospitals, and clinics in both Canada and the United States. In his research, he has conducted hundreds of educational institutes while serving as the principal investigator involving five major universities in researching today’s vitally important health record database. He has also served as CEO of several major hospitals and corporations, and as a board member of two health insurance companies, and is often referred to as a visionary ahead of his time. 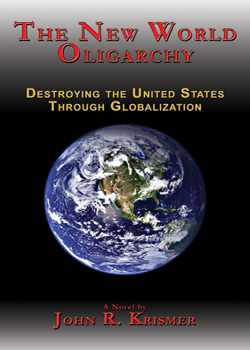 The New World Oligarchy: Destroying the United States Through Globalization A Novel