Night of the Sadist 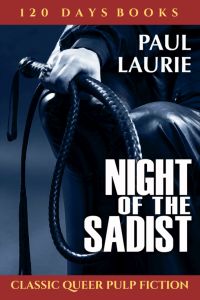 Night of the Sadist

The party was in its early stages. Everyone had a cocktail and most appeared to have downed a few before they arrived. Allan, wearing a wig, padded bra, miniskirt, panty girdle and make-up, introduced himself as Elaine. Tom smiled and complimented the transformation.

Allan smiled with cloying coyness and cooed, “Why thank you, Tom. You should get to know me for the sweet girl I am.”

As Gerry and Tom took a few steps away from the bar, they were approached by a broad-shouldered man with a crew cut. He wore a leather jacket, motorcycle cap, Levi’s and boots. Tossing his head carelessly in Tom’s direction, he asked Gerry, “Is that your new boy?” His inflection made it clear that “boy” was a term of contempt.

Tom was about to say something, but Gerry answered for him. “No, Al. I’m his boy.”

There was a finality to the way it was said that had an effect on the other guy: He turned to Tom, grinning, his hand outstretched in friendship.

Al smiled and looked pointedly at Gerry’s whip: “If you decide to give your boy here a taste of that a little later, let me know. I’d like to watch.”

“I will,” Tom promised, beginning to get the idea. The whip Gerry wore was meant to be used, and he was going to use it on Gerry, not the other way around. It sounded as though an intriguing evening was in store.