Life is hard enough on the frontiers of Human space, but lovers Cassie O’Neill and Craig Lowell find themselves in danger from an unexpected source. A supernatural entity out of the legends of Old India has invaded their colony world. Alien and malevolent, the entity seeks to destroy the presence of humanity on the planet Orpheus, and Cassie and Craig stand in its path. Can they defeat death itself to save themselves and their world? 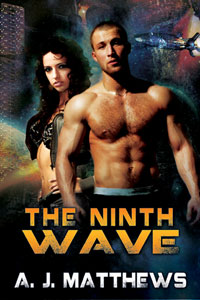 …she came to a more recent memory, a memory of a rocky shore, with breakers surging over black Orphean granite. Waves smashed in white ruin. Spray hit her cheeks, stinging with salt and cold as she wrestled with the line to the sensor buoys further out on the raging sea. “Craig! Give me a hand here. I can’t hold this thing!” she called.

Strong hands closed on the cable next to hers. A tall, hard, muscled body moved alongside her as Marine Specialist Craig Lowell, late of New Zealand, came to assist Biology Specialist Cassandra “Cassie” O’Neill. Between them, they straightened out the dangerous kink in the cable that threatened to ruin two solid days of work. Hot in spite of the cold wind, damp in spite of their survival suits, they stood back and grinned at each other in the happy knowledge of work well done.

“Urgh!” Craig shuddered. “These old suits aren’t up to much. I’ll be glad when we get the new models next month.”

“Me, too. I don’t know about you, but I’m soaked!” she said, shaking droplets of water from her hair. “Let’s get back to the module and clean up.”

They returned to the small geodesic field module, set up a kilometer inshore in a sheltered hollow, well back from the sand dunes. Craig went to his sleeping bay whilst Cassie went to hers next door. She peeled off the suit and flung it into the hopper where the servo-systems would clean it of muck and sweat. The cotton combinations followed, and she stood, nude, staring thoughtfully at the partition wall.

Craig stood just the other side of that wall. A tall, muscular Kiwi, with a ready smile and a deep voice that sent shivers up her spine. From their very first meeting she had felt attracted to him. Nothing in his manner suggested he was repelled by her. He would be nude as well, by now. Cassie had seen him working with his shirt off before, could see his muscular body in her mind’s eye as he labored on some task in the warmer southern climes. Now she felt a strong desire to see what he looked like in the raw, but that was out of the question—for now.

Pressing her ear to the partition, she sought to make out the sounds of his movements in spite of the efficient sound insulation.

She jumped back and stared at the wall. Maybe the insulation wasn’t that efficient. His voice had come through clear enough. Did he suspect she was listening to him getting changed? “Sure!” she called, blushing at the thought. “But I need a shower first.”

“Oh, I dunno! It ought to be me, my need’s pretty desperate!”

“And mine isn’t?” she said sweetly. It’s not all I’m desperate for! she thought. Her pussy gave a sympathetic little twitch.

Cassie wrapped a towel around her and emerged from her bay just as Craig came out of his, that ready smile broad on his handsome face. He wore a towel around his waist, showing off his tanned, supremely fit body to perfection, each pectoral, each abdominal muscle sharp and hard. Cassie felt a distinct twitch in her loins, and her cheeks grew hot as she realized she was staring. Her blush deepened when she realized he seemed equally taken by her.

“Ready?” he asked eventually, hiding his right hand behind his back.

“I’m not sure if I want to compete with you,” she said softly.

He looked at her, his head tipped to one side, eyes narrowed. “How shall we decide, then?”

Cassie chewed her lip. “Want someone to scrub your back?”

His eyebrows rose and a smile creased his face. “I would like that,” he said lightly, “but you might get wet.”

Cassie reached out and stroked the line of his jaw with her fingertips. “Oh, I don’t mind getting…wet,” she said huskily.

Craig’s smile broadened into a grin and his eyes sparkled. He took her hand and softly kissed her palm. “Are you sure?”

“Dammit, Cass!” he said in a near-whisper. “All the time we’ve known each other, I was never sure if you’d be interested in me. Now I feel like all my birthdays have come at once!”

She clasped his hand and grinned up at him. “Then why don’t you come and open your present?”