The Partridge and the Peartree

Phillip Peartree, Duke of Bartlett, dreamed of a peaceful life with a suitable mate until a hunting accident left him scarred and nearly deaf. Resigned to spending the rest of his days alone, Phillip has devoted himself to rebuilding his family estate. But a chance encounter with a lovely young woman in a dusty bookstore rekindles his almost-forgotten hopes and dreams.

Lady Amelia Partridge has no time for the frivolity of the London social scene. In addition to her work with the Ladies Literary Society, she has a mission – educating poor children in the city. She also has a secret life, one she fears might drive away the young duke who has become increasingly important to her. 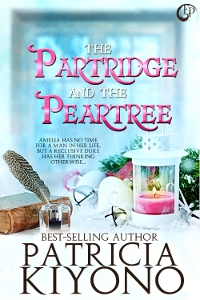 The Partridge and the Peartree

Chapter One
PHILLIP PEARTREE, TENTH Duke of Bartlett, squinted as he scanned the titles on the dusty shelves of his favorite bookstore. He needed something new to read, something to help him relax and forget the depression weighing him down ever since he’d inherited his burdensome title. Phillip had been aware of his father’s extravagant tastes, but he’d had no idea about the extent of debt they’d caused. Debt that had become his worry and responsibility. In the two years since his father’s passing, the young duke had managed to satisfy most of his creditors by selling off part of his estate. By living frugally, sometimes even doing manual labor along with his staff, he hoped to maintain and improve what was left. Needing a respite, he’d decided to spend the holiday season in London, near his sister and nieces.
London offered plenty of activities for an eligible bachelor, but the social whirlwind was something Phillip avoided. Not that he wanted to be alone. He’d always dreamed of having a contented, if not happy, life with a suitable mate. Ideally, he’d prefer to wed someone with charm, looks, and intelligence. His hand went to his face, tracing the scars left from the hunting accident that had changed his life several years before. How could he hope to win the hand of such a woman once she compared him to the good-looking members of the ton? There was no shortage of handsome single men who knew exactly how to converse with a woman, how to charm them, and how to woo them.
So he lived vicariously through the characters in his books. They were his friends. Although he’d already read nearly every title on the shelves, he’d come to the quiet little shop, on the edge of town, hoping to find something new. There had to be something…
“Oooof!”
The missile hitting his abdomen doubled him over, knocking the breath from his lungs. When he recovered enough to straighten, his eyes focused on the most beautiful woman he’d ever seen. Had the punch to his stomach addled his brain, or did a halo surround the woman’s face? The lively young thing waved her arms as she talked, and it seemed her mouth moved as quickly as the rest of her. Shiny golden curls tumbled from her bonnet, and her deep brown eyes radiated with intelligence and purpose. Fascinated by the way her luscious lips formed words, he forgot to pay attention to what she was saying.
The lips stopped moving, and her eyes widened. She must be waiting for him to reply, but he had no idea what she’d just said.
“Er — pardon me, miss. I didn’t see you. I sincerely hope you’re not injured.” Spying a handful of books scattered near her feet, he quickly bent and retrieved them for her. “Here you are.”
Her lovely brown eyes narrowed. Had he said something stupid? Sometimes he did, especially when he hadn’t followed the conversation closely. Since he’d lost most of his hearing in the accident that had disfigured his face, he’d learned to read lips quite well, but occasionally he’d get it wrong, much to the amusement of his cousins, who would tease him mercilessly.
“I’m fine, good sir,” she said, taking the books he offered. “And I thank you for retrieving my books.” She took them and whirled away without so much as a goodbye.
Phillip stood transfixed, staring after her.
Slowly, common sense returned, and he sighed regretfully. Such a lovely woman would never consider a friendship, much less a courtship, with someone like him.
Remembering his reason for entering the bookstore, Phillip continued to peruse the titles. At the back of the store, he located the section from which the lady had emerged. There he found an assortment of slender books like those she had dropped. They were children’s stories. Of course. She was married and probably had been there to purchase books for her children. He’d best forget about dreaming of a life with her.
Chagrined, he moved on to the next section. His eye caught a familiar name from his youth. An elegantly bound volume held a collection of poetry by Robert Burns. He remembered his grandmother, when she still lived, sitting on a bench in the estate gardens, reading her own well-worn book of Burns’ poetry. Later, when she fell ill, Grandfather would go to her chambers and read to her, his gentle voice caressing the words as if singing a love song. Grandmother would lie back with her eyes closed, an ethereal smile lighting her face. It was his favorite recollection of his grandparents and the love they shared.
Warmed by the memory, he picked up the volume, took it to the shop clerk, and purchased it.

ROBERT TOWNLEY, THE duke’s valet, stayed close to his master, but not so close as to intrude. The duke managed to get around quite well on his own, reading lips and using his other senses, but he couldn’t hear warning shouts or the rushing carriages traveling the busy London streets. Though Robert hadn’t been instructed to do so, he’d made it his mission to protect Phillip whenever the young duke went out.
Robert’s father and grandfather had both served the duke’s family. Robert himself had grown up on the estate, spending his youth with the young heir. He’d been allowed to sit in on Phillip’s lessons, never letting on that he was learning as much as Phillip. After Phillip left for Eton, Robert had continued his own education by reading the duke’s discarded newspapers and everything else he could get his hands on.
When Phillip’s gun had misfired, leaving him scarred and deaf, he’d come home to convalesce, and Robert had been one of the few people he’d allowed in his rooms. The two men had forged a bond more akin to friendship than the usual relationship between servant and master. Now he noted Phillip’s dazed expression.
What happened in that bookstore?
He reached out a hand and lightly touched the duke’s sleeve to get his attention. “Your Grace?”
Phillip blinked several times, seeming to bring himself into the present. “Yes, Townley?”
“Is something amiss? Did something happen in there? You look rather… dazed.”
Phillip sighed. “I suppose I do. I just caught a glimpse of heaven.”