Kat has been The Tattoo Lady for five years and she has been propositioned for nearly everything by paying customers outside her cage. Devon’s proposition is something new, to be a prop in a photo shoot. She accepts and is delighted to find the model she will act as prop for is a beautiful woman. 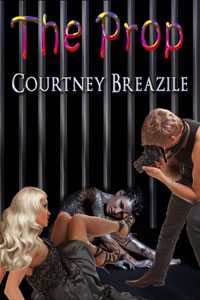 Kat got into her zone and performed. She stretched and strutted and displayed herself in the background as Tiffany did the same near the bars. Devon took what seemed like a million pictures before making any comment at all.

“Kat, I need you to get closer to her, maybe like you’re sneaking up. Tiffany, I want you to look a little desperate, hold the bars tight like you really want out.”

He started snapping pictures again and Kat crouched, creeping forward then got to her hands and knees, crawling toward Tiffany. She was so close and her thoughts began to get wicked. She stuck out a tongue and dragged it up the side of Tiffany’s leg. Tiffany’s leg stiffened, but she didn’t give much more reaction than that and Devon kept taking pictures, so Kat didn’t stop until she reached Tiffany’s dress.

She turned to the camera then, one hand slipping up Tiffany’s leg and under her dress, she bared her fangs.

Kat stood then, towering over Tiffany she put her hands on the bars, mimicking Tiffany’s stance like a shadow. Then she bent her head and pressed her lips to Tiffany’s bare shoulder. She wasn’t positive, but she thought she heard a small moan from Tiffany. Kat stepped back as Tiffany slid to her knees and stuck one leg out between the bars.

Feeling more and more turned on, Kat stretched and posed close to Tiffany, touching her as much as she could without being obvious. Tiffany didn’t seem to mind, but Kat didn’t know if that was all a part of the modeling thing or not. She never reached out and touched Kat, never initiated but seemed very accepting.

Devon finally lowered the camera and they both stopped posing, walking up to the bars and waiting for instruction. “I think I want to do a few from the other side now.”

“Wow, that was fun,” Tiffany said with a bright smile. “Devon always has interesting concepts for photo shoots, but I think you might be my favorite.”

Kat’s heart started to beat faster and she felt heat flush her body, Tiffany did seem to like how Kat had been touching her. “It is quite fun,” Kat agreed, her voice a little husky. She had to bite her lip to keep from giggling after she spoke. She hoped Devon would hurry up, he was taking far too long and she wanted an excuse to touch Tiffany some more.

Devon walked in then. “I want to get some from behind, so do what you were doing before as if I was still on the other side.”

They posed like that for a while and Kat’s mind wouldn’t stay off Tiffany’s curves. Without being able to see Devon taking pictures of them, she almost felt like they were alone. She had to stop herself a few times from reaching out and really grabbing her, turning her around and seeing if there was as much lust on Tiffany’s face as there was in Kat’s body.