For 2000 years the Creator's language lay dormant; for all intents and purposes – a Dead Language, a by-word associated with the forlorn plight of a People without an identity. Miraculously, following the pattern of the death, burial and resurrection of the Messiah, this "Living Word" rises, made to live again, on the 3rd day, our day, to become the standard to which the People of the Book must return in order to seek out and identify their Deliverer!
The eternal stage has been set as the conflict of the ages rises to a crescendo, culminating in the greatest assault against The Sovereign King and those in Covenant with Him, that the world has ever seen. It is by no means an accident that an awakening is occurring. The return to the Ancient Paths and an even more Ancient Tongue leading a People to their destiny – a confrontation with the Anti-Messiah!
The Apocalyptic weapons of this supernatural being, coupled with the intentional, mistranslated, prophetic declarations of a broken, annihilated, People, are about to be revisited as history records the restoration of this Ancient Pure language, its latent power in the hands of a Faithful Remnant, tipping the balance of Power! You are about to be introduced to the single, most powerful force in Creation – The Rainbow Language! ARISE O’ YAH AND LET YOUR ENEMIES BE SCATTERED! Psalms 68:1

About the Author:
David Mathews is the Pastor/Founder of Manna from Heaven Ministries located in Salem, Oregon where he and his wife Brenda oversee a local congregation. The ministry has an international radio and television presence with over 30 years of trusted, proven ministry service (the last decade and a half leading a Sabbath keeping, Torah observant, and Hebrew Roots assembly). His message incorporates the depths of the Hebrew language and the subtle nuances of the pictographic lettering and their numeric values into the tapestry of his teaching. His extensive background in marriage and family counseling and uncompromising commitment toward a return to the Pure Language of Scripture is the driving force behind the vision of restoring the traditional marriage covenant and family structure according to Torah. 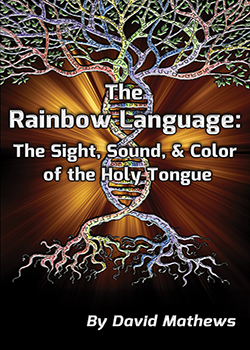