The Return of Master Fantastic

High school graduate Paul Coleman’s life is anything but ordinary. It has been only a few months since he, Myrna Trillian, his girlfriend, and her father, Montague, an Elementalist/magician, destroyed a demon named Hekla that wanted Myrna for a purpose almost too diabolical to believe. Hekla had used the power of sound to kill Paul’s best friend, and her attack left Paul with very little ability to hear.

Montague is now gone, having died in the final battle against Hekla. His last feat of magic was to open a portal to Vann, a water world, where Paul and Myrna now live. Paul is mostly deaf, and Myrna is totally deaf, having been born that way.

However, things take a turn for the weird when Myrna suddenly starts hearing as a normal person would. She also exhibits the ability to open portals to other worlds as her late father did.

Mystified by her sudden transformation, Paul needs to know more, and so does Myrna. They return to Earth and find it under attack by a group of winged demons from Hekla’s home world, Sithros.

They also find that Monty has somehow been resurrected, and while trying to solve that riddle, they also have to fight against legions of winged aliens who think nothing of slaughtering millions. It will take everything the trio can come up with to fight against an alien horde that will stop at nothing to conquer—and destroy. 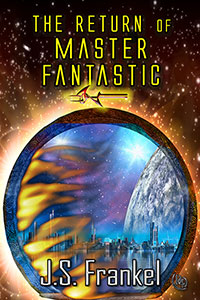 The Return of Master Fantastic

The viewing room in the funeral parlor was quiet and large enough for only around five people. Paneled in wood and quietly lit in order to give the attendees a sense of calm, perhaps, when saying goodbye to a loved one, I couldn’t find much in the way of peaceful feelings. My insides churned. Saying goodbye was never an easy thing to do, and in this case, it was doubly hard, not only for me but also for my girlfriend.

As we walked up the steps to enter the funeral hall, a number of reporters had already shown up to snap our pictures and try to get an interview with Myrna. As the daughter of the late Master Fantastic, this was front-page news. I couldn’t hear anything but saw the lips of the reporters move. “How about an interview?” one of them mouthed.

“Do you have anything to say?” asked another. “The public would like to read about this, Ms. Trillian.”

And so it went. Myrna kept her head down and didn’t look at anyone as we walked inside. This was to be a private viewing, and besides Myrna and me, only one other person had shown up to pay his respects, Harry Landru, a fellow magician.

Now she stood with me at the side of the coffin. It had been strategically placed in the center of the room. Her father, Montague Trillian, lay inside, his face peaceful. Harry knelt at the side of the coffin for a few moments, his mouth moved as if offering a prayer or perhaps he was just saying goodbye, and with a quick movement, he arose and turned to face us. “You two will be okay, won’t you?” he’d asked.

Harry offered a friendly nod and exited stage right. I watched as he made his way out of the room and turned around to direct my gaze back to the coffin in order to view the body inside more closely. The undertaker had done a good job of hiding the scars and cuts, and Monty—he’d always asked me to call him Monty instead of by his full name—looked as if he were sleeping.

The narrow and lined face with kindly features was peaceful in repose, his eyes, a deep green like Myrna’s, were closed, and part of me expected him to wake up any second, stretch, and get on with life…but I knew it wouldn’t happen. I’d only known him a short time—less than half a year—but in that time, he’d acted like a father to me.

As I stood there, Myrna fought back tears and signed, What are you thinking about?

There are too many things to count. It was hard for me to accept his death, and it had to be even harder on Myrna. My hand movements abruptly stopped as grief overwhelmed me. The two of us stood there, lost in grief. She cried silently while my mind went back to every single event which, when put together and sorted out, had brought us here today…

Cliff’s notes time, as the events were many and varied. Growing up in Portland, things had been normal for me. My parents died when I was very young, and I’d gone to live with my uncle Frank, a neglectful drunk. I learned to do for myself, taught myself home repairs, worked at a series of part-time jobs in order to get extra money, and learned self-reliance more than anything.

Things were normal…up until one winter’s day during my final year in high school. Then my definition of what constituted normal changed forever. A portal formed in an alleyway where Rory Muldoon, my closest friend, was taking a leak. A monster stepped through that portal and attacked us. It used the power of sound as a weapon and blew Rory to bits. During the attack, I also lost most of my hearing as the creature’s sonic waves destroyed the nerves and structures of my inner ear.

Naturally, no one believed me. Who would? I dealt with nightmares, cold sweats, and developed a psychological condition known as trypophobia, a fear of holes or, more precisely, a fear of what came out of them.

In my case, the monster looked like a cross between a dragon and a dog and had long, leathery wings which opened up to reveal horrible parasites, parasites which screamed out an unearthly and unholy sound. They were the last sounds I’d ever clearly. “My name is Hekla,” it said, just after it had blown Rory apart.

It came after me, but a portal opened up, sucked it back to wherever it had come from, and left me there, profoundly deaf and grieving over my ruined life and the loss of my closest friend.

Adjusting to the changes took time—time and effort. Even with operations, my hearing never improved much, and although I was scared of totally losing my hearing one day, a person had to be proactive. My uncle didn’t care whether I lived or died, so I moved in with my aunt Lucy and her son, Willie, who lived in Tacoma and finished off the school year.

A phone call shortly after I graduated changed things for me. My aunt answered it and turned to me, a stricken look on her face. “Your uncle just died.”

I wanted to feel bad, but couldn’t. My uncle had never been nice to me, never shown me an ounce of affection, and now it was too late and too bad for everyone. With no money—the government took most of it—I moved back to Portland, learned sign language, worked at a series of part-time jobs, and in a stroke of luck, met Montague Trillian, also known as Master Fantastic.