Ancient codes and a legendary killer lure a young detective into a dark and dangerous world.

When a murdered historian is marked with a mysterious code, homicide detective Dee Brentano worries about his colleague – her missing father, Alexandre. FBI special agent J. R. Pierce tells her that Alexandre is wanted for this murder.

Dee encounters a potential ally in Detective Gregory Brenner. She’s attracted to him, but fears that he’s playing her to find her father. She’s also drawn to her father’s protégé, Scott Bateman, who can decode the Ripper letter’s secret message and the symbol on the murdered historian. It’s bait for luring supernatural entities. It’s also a map to locating her father.

Dee must choose her path wisely. One leads to a supernatural lover, the other to an immortal serial killer.

Dean Koontz called Ramsland’s Ghost: Investigating the Other Side, “The best book of its kind I’ve ever read,” and Publisher’s Weekly stated that “Ramsland is a master of foreboding.” Whitley Streiber found The Heat Seekers to be a “gem” and said, “Katherine Ramsland is a marvelous novelist, who approaches her subject with chilling, fascinating inner knowledge.” 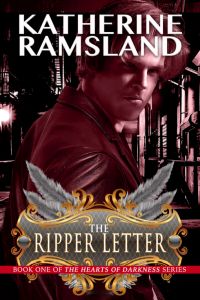 Pierce ignored me as he bent down without fully turning his back and removed a grayish-blue 8 x 10 envelope from the cabinet.…
“This is what I wanted to show you.” He placed the page in front of me and crossed his arms. It was a handwritten letter, somewhat smudgy as if penned with a nib and bottled ink. Its thick letters were carelessly formed. I noted “From hell” at the top and the salutation, “Mr Lusk.”
I did not have to read more to know this was a copy of the letter that had accompanied a piece of a kidney in 1888, sent to the vigilance society. Many believed the kidney had been removed from one of Jack the Ripper’s victims – Eddowes.
To have Pierce put this document in front of me just hours after immersing in the Ripper case raised a flush in my face. I bent my head. It couldn’t hurt, I thought, that from his vantage point Pierce could see down my shirt to my cleavage. Concentrating, I read:
From hell
Mr Lusk
Sor,
I send you half the
kidne I took from one women
prasarved it for you tother piece I
fried and ate it was very nise I
may send you the bloody knif that
took it out if you only wate a whil
longer
Signed Catch me when you can
Mishter Lusk

I sat back and shrugged. “I don’t understand.”
Pierce smiled. “I think you know what this is.”
“A copy of a letter attributed to Jack the Ripper. Any undergraduate CJ student would know that. It’s famous. So?”
Pierce leaned toward me, one hand gripping the edge of the table close to my breast, and looked me square in the eye. We were so close I could see flecks of amber and green in his hazel irises. He was cool while I was perspiring.
“First,” he said, pointing at the letter, “this is no copy.” He paused to let this sink in. “This very document has been missing from police files for over half a century. Second, we found it among your father’s possessions.”