The new U.S. President is a ruthless scoundrel. His activist son, Diego, discovers that his father conspired with the CEO of a major oil company and the dictator of Venezuela to manipulate the oil markets, causing high gas prices, and ensuring his election as a drill friendly president. Diego’s environmental action group exposes the President’s illegal act, unleashing a firestorm of criticism against the president, and several nasty murder attempts against Diego by the big oil CEO. The President’s troubles increase when a mistress comes forward claiming to be carrying his child, his wife sues for divorce, and the dictator of Venezuela invades neighboring countries to control their oil, and threatens the U.S. with an attack of donated North Korean nuclear missiles if the U.S. tries to intervene. And this is only a small part of this tangled tale of intrigue and struggle for power. Diego and the President both try to take control of this out-of-control situation, but many surprising twists and turns finally lead to an unexpected resolution. 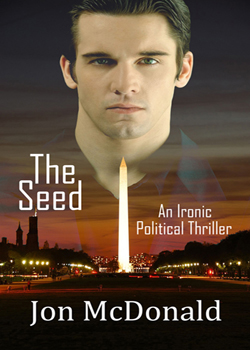 Edward Perez, the President Elect of the United States of America, was clearing out his office at Perez Petroleum in downtown Chicago. It was not an easy task for him to relinquish control of the business he had founded in a parched Texas town over forty years ago. He had started out with nothing, building Perez Petroleum into the second largest, privately held, gas and oil exploration company in the United States with many additional overseas contracts. By cleverly leveraging his humble beginnings, the exploding worldwide energy crisis – and with the help of major Republican backing, and corporate money – he had overcome all opposition to his candidacy – despite the heroic efforts to defeat him by the environmentalists and (what Ed called) the dippity-do liberals.

Diego was ushered into the President’s private office. He was surprised to find an extremely handsome Mediterranean looking young man already waiting.

“Diego…,” the President extended his hand. This President did not do hugs. “Glad you could make it at such short notice.”

“Dad.” Diego acknowledged his father. “You wanted to see me privately?” He questioningly nodded towards the young man.

“Yes. Delicate matter. But important.” He turned to the stranger. “Have you two met?”

Diego answered, “No. Why is he here?”

“Well, let’s just say it’s about a domestic matter that concerns you and Brandon. This is Mohammad Hamam. He’s one of our FBI agents on special assignment. He was chosen for his very unique talents, and he has a little story you might find enlightening.”

Mohammad smiled and leaned back. “Sweet – very sweet. This is when I really love my work.” He was sitting on a sofa and patted the cushion next to him, inviting Diego to join him.

“Guess where I was this afternoon?”

“Doing your buddy in the men’s room at the UIC library.”

Diego turned grey and quickly looked up at his father. “What is this?”

“I was assigned to seduce your – what’s his name? – Brandon.”

“Just wanted you to see what your partner is really like,” Ed smirked. “Isn’t it time you dumped the jerk?”

Ed ushered Lia down the hall to his room, closing the door softly behind them.

“How did you get rid of the agents?” Lia asked.

“Sent one to check the parimeter of the house, and the other to check on Carmella.”

“But you’ve left yourself exposed.”

“Only to you.” Ed rather aggressively led her to the bed, throwing her back onto the spread, and himself on top of her. “You just drive me crazy, you minx.”

“Is everything all right in there, sir? Do you need assistance?” an agent asked through the door.

“Lia whispered, “Ask him how he is at unfastening bra straps.”