In the previous book, The Celtic Serpent, after a diagnosis of cancer and the death of her grandmother, Angi Talismann found herself on an incredible journey. Shackled to an unstable piece of ancient technology in the form of a medallion, she and her colleagues were forced to locate lost medallion gemstones which had been scattered to different countries in the seventeenth century. Close on their heels was a resolute killer bent on acquiring the medallion. Tracking down the descendants of old Irish and Scottish families assigned to protect this ancient treasure proved a daunting task. Eventually, locating the gemstones, the initial stage of their venture ended with twelve individuals stepping through a golden, serpent gate on the Hill of Tara in Ireland propelling them into another world. While stating they would return in three months, its assurance was uncertain.
The journey continues in this book. Angi and her companions quickly adapt to their new environment on Tir na nOg, the land of the Tuatha de Danann, deemed to be the ancient gods of the Irish. Here they learn that their escort, Sirona, is a distinguished member of the kingdom and her ancestor, Myttrwn, is a gifted scientist and magician, supposedly centuries old in Earth terms. Under Myttrwn's guidance the twelve discover a different perspective of the universe, learn the healing and destructive powers of light and sound, and gain some insight into their future role while Angi takes her first steps in mastering the complexities of her medallion. Yet, with all the goodwill, a powerful individual, Zolar, is displeased with their presence in Tir na nOg and Angi's possession of such advanced technology. He sets out to rectify this matter in his own treacherous way. The journey to Tir na nOg for the twelve travellers would create an indelible imprint on their lives.

About the Author:
Sally Robertson, born in Prince Edward Island, obtained her Bachelor and Master's degrees in Canada, and her PhD from Curtin University of Technology in Australia. She is a Usui Reiki Master and Karuna Reiki Master, author of The Pebble and The Celtic Serpent, co-author of Mission to India and Invitation to Canada, and lives on Vancouver Island, British Columbia, Canada. 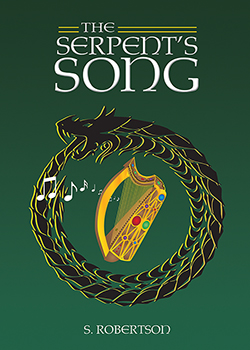