When Andre duCleau’s Will leaves his entire estate to his runaway son, François, daughter Antoinette is forced to make a drastic choice: Find her brother or live in poverty. She chooses the later and travels to Leonesse disguised as a young nobleman. Antoinette doesn’t find François, but she does find a home with the city’s flying squadron, the Mothmen.

Once the guardians of Leonesse, these brash young men took to the air in flying machines created by King Georges’ Venitani inventor, but now, they and their brave deeds have been almost forgotten…until war again arises.

Secure in her disguise, Antoinette is ready to fight…until her feelings for Etienne, a fellow flyer, get in the way. What will happen if Etienne and the others discover her secret? Will they denounce her or will they accept as The Seventh Mothman? 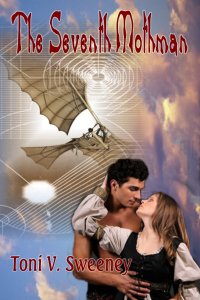 “What’s it like to fly, Papa?” “Flying?” As he always did when Toinette asked that question, her father smiled. This time, however, it was brief, trailing off into sadness, more for his daughter than for himself. As if he knew she was simply attempting to distract him from his illness, and the fact he probably wasn’t going to survive. Also that she was aware she failed.

“It’s...wonderful...” Briefly, a glow of remembrance replaced the fever in his eyes. “That first moment, when you realize there’s nothing between you and the Earth, that’s terrifying, but then... You look down, and see the land so far below, the rivers like tiny blue ribbons, and the people and animals small as ants, and feel those great wings stirring the air. You know you’re free, to soar...past the moon to the sun, to the stars, if you care to.”

As usual, so much talking made him cough, a little stutter in the throat, spreading into a spasm shaking his entire frail and slender body, and pulling free some of the killing fluid in his lungs. Seizing the handkerchief lying on the coverlet, he pressed it to his mouth, hiding the crimson spatter. “Water...” Toinette poured some from the pewter pitcher on the bedside table, holding the goblet to his lips. Pulling the stained cloth from his fingers, she crumpled it into a nearby bowl in which lay others similarly soiled. He gulped down the liquid and lay back with a sigh.

“Merci, child.” Andre’s eyes closed and he was still again. His chest barely rose and fell. Except for that, Toinette might believe he’d already left her. She didn’t speak, just rose and pressed a kiss against his hot, dry cheek, then tiptoed from the room, walking slowly down the dark corridor to her own. In her chamber, the bedroom lamp was unlit. She left it that way, just knelt in the dark by the bed, clasping her hands so tightly the skin felt as if it would split under their pressure as she bowed her head and prayed. Please...let him survive this illness as he has all the others...

It was a selfish prayer, but she couldn’t help that. Toinette had been taught the goddess never answered if someone asked for something just for himself. Still, her father was all she had left, and it wasn’t fair she should lose him, too. In the past two years since the coughing sickness came upon him, he’d been bedridden more and more, but each time rallied and rose from his sickbed in apparent good health. This time, however... This time, the fear he wouldn’t recover was all too real.

Knowing she might have to get up during the night as she had for the past week since Andre took to his bed, Toinette didn’t bother to undress but simply slid off her slippers and lay fully-clothed upon the coverlet. Although she settled her head on the pillow just as she had for the other six nights of the week, this time, sleep didn’t come. Instead, she lay there, thinking... ...of her father, of the life he had lived, and how, inevitably and soon, it would end.

Andre was a minor nobleman’s son. He was considered a good man and a good master but that wasn’t what made his reputation. He was also a former homme de mite, a Mothman, one of those sixteen souls brave enough, or foolhardy some would say, to dare use that mad flying contraption of the Vicomte’s Venitani inventor. Sailing through the sky on wood and canvas wings, he’d fought in the seventeenth war with the Nords, helping Vicomte Georges triumph over his earth-bound enemies. With the Peace, he’d cashiered out and come home to marry his sweetheart Adelline deVille.