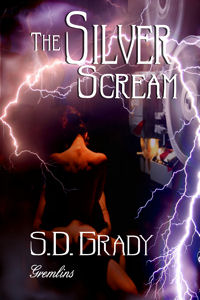 Wrapped in Seth’s arms, warm in the afterglow of passion, Gilda listened to the remaining tracks on her CD. She closed her eyes and hummed along. His nose nuzzled her throat; his hands roamed her wide hips.

A buzzing joined the music.

Must be a bad mp3 file, she mused.

She wiggled, pushing Seth off her. “Do you hear that?”

He tried to pull her back down. “That’s just me, Gil. Come here, I want another go. Will you dance again?”

“No. Stop it, Seth. The lights are brighter, too.”

Sighing, he sat up. With one eye closed, he looked up at the spotlight. “Those are always bright.”

On her knees, Gilda looked around the auditorium. She pointed at the screen. “That’s creepy.”

He turned to look. He tried to block the flicker from the rotating light and stared.

“Do you see it?” Gilda swallowed against a dry throat. “It’s…”

They both watched the shadowy figure insinuate itself across the silver screen. The ghost moved with the grace of a dancer, but displayed an atypical buxom figure.

Gilda stood up and turned to look up at the porthole. “The projector’s not on. How is it there?”

Seth began to pull on his pants and offered her the gown. “I don’t know, but that means somebody else is in here, and I think we’d better get going.”

“Yeah.” She continued to look from the mysterious figure to the projection booth. “I guess you’re right.” She slipped the dress over her head, settling the straps on her shoulders and smoothing the fabric over her breasts.

She spun around, trying to focus on the source of the sound.

“Watch out!” Seth’s voice stunned her.