It's Christmas 1877 and Anne Follyot— of little beauty and no fortune, but sturdy spirit and an excess of imagination— is invited to stay with her favorite aunt in Cornwall. She's all anticipation, waiting for the man chosen to escort her on this journey. According to her aunt, she met him before, many years ago, but Anne cannot remember him and she's positive that he must long-since have forgotten her. She's never been memorable.

But J.P. Deverell, Esq. is now a grown man with a dangerous reputation, of which her aunt cannot possibly be aware. And Anne means to make the most of her aunt's mistake and this adventure. She considers herself a modern, independent woman, for whom a little scandal is well overdue. If she doesn't seize this chance now, she might never have another.

As Charles Dickens wrote, "No space of regret can make amends for one life's opportunity misused."

He's in no temper for eggnog and mistletoe; no mood to tolerate the painfully polite company of some plain spinster, in a carriage, for three days. It's probably a contrivance to get him home for Christmas.

He'd planned to spend his Yuletide working, alone and in peace. But a letter from his mother has guilted him into this act of begrudging chivalry, aided by the whispers of his best friend's mischievous ghost.

But this journey will not turn out quite the way either traveler expects, for when these two opposites collide, so do ghosts of the past, the present and the future.

It will be a holiday season with all the usual fare—peril, pandemonium, family quarrels, mulled wine and bodily injury. Certainly a Christmas adventure never to be forgotten this time.

At least, by one of them.

Publisher's Note: This book is part of the Deverell's world, but can easily be read as a standalone title. 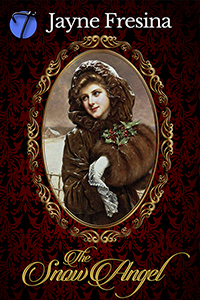 Set in the Victorian era, The Snow Angel is a delightful Christmas romance filled with Jayne Fresina's trademark wit, empathy, and originality. The dialogue sparkles, the story twists and turns in surprising ways, and--by the end--you're sure to have shed a tear or two. Okay, more than a tear or two in my case. The plot is a compelling combination of Dickens' A Christmas Carol (ghosts and all) and a Georgette Heyer road trip romance (complete with coaching inns and kisses). I devoured it in one sitting because, when it comes to good books, I have no self control whatsoever. Highly recommended. ~Bestselling Historical Romance Author Mimi Matthews

The teller of this tale must hereby begin with an apology, for undoubtedly our leading man is not, at first chapter, the stuff of which romantic heroes are made. Except, perhaps, for the brooding, constipated expression into which his features most naturally fall, quite unintentionally possessing an air of thwarted passion and wounded bear.

But since he read few novels himself, he could have no idea of the stormy, ardent imaginings that his menacing frown inspired in the minds and hearts of the hapless young women he passed— readers and devourers of Brontë, Gaskell and Austen. He simply thought them all tied too tightly into their corsets and hairpins, or that their glacé kid shoes were new and pinched. Apart from that he paid little attention to their antics. Females were, in general, hysterical creatures; it was well documented. As engines ran on coal and steam, woman ran on smelling salts, screaming fits and accusations.

He did not intend to commence the cost of keeping one himself on a permanent arrangement at any time in the near future.

As in the case of most folk, he was in such haste to get where he was going that day— which was a Thursday, not that it matters much, but he likes to be particular— that he very nearly missed the journey completely and, consequently, could have missed her too. But on this day an angel, not taking any chances, came along and knocked seven bells out of him. Angels, he was about to learn, can do that to a man; they are not the dainty, ethereal creatures one might imagine.

So at least you know he will get his comeuppance, even if you do not like him much yet. Let that be the salve for your disappointment in finding him fall so far short in all the necessary accoutrements of the knight in shining armor.

Before she walked into his life, he was a man who thought he could plan and structure an orderly route through his life; that he was in charge of his own destiny; that he knew everything, wanted for nothing. Even his stride was confident, forceful, changing course for nobody, as if the pavement was privileged to exist under his boots, and everybody who strolled upon it owed him a debt of gratitude for enriching the air with his presence.

Commandeering the street in his usual fashion, his forward motion pausing or diverting for nobody, he sailed along on that Thursday with incautious speed. His fiercely scowling brows, like the wings of a giant hawk poised for flight above the raised high collar of his greatcoat, caused anxious folk to clutch their small children aside, but still he paid no heed to anything directly under his feet.

Which is how it happened that he tumbled.

One moment, his grim perusal— filled with the reflection of snow-laden clouds— was fixed on a distant point, far away in his thoughts; in the next he was felled to his knees from that great and lofty height, like the wooden dummy in a game of Aunt Sally. And because he was unaccustomed to the sudden loss of power over his own limbs, the fall was even more awkward, ungainly and— such is human nature—comical to those who watched.

A gloved hand reached down, fingers grasping his coat sleeve.

"Steady there, young man," a husky voice exclaimed, half-laughing. "Look where you're going, before 'tis too late."

In that moment, no more than the blink of an eye, he thought he saw white feathers.

Flushed and hot, aware of folk turning to stare and chuckle, he straightened up in haste and pulled his arm away from the old woman's grip. "Thank you," he muttered, angrily brushing down his coat sleeves and glaring at the dent he'd left in the abandoned trunk at his feet. "I am quite alright."

"Are you? Keep your eyes open, sir, or you will look back one day and wonder where all the time went. Enjoy every breath and don't waste it cursing at the weather. Such things a man cannot change for the better. Some things he can."

He felt foolish enough, falling in the street, without being lectured to in this odd fashion by a stranger. And a woman, at that! The London streets were full of pickpockets and chancers, so he was always guarded and wary, especially around those with an overly-familiar manner. "Yes...well...good day. Get out of my way then." He stepped around the trunk, trying to ignore the pain in his knee.

After a few yards, certain the whispering old woman followed him very closely— walking in his very footsteps— he turned his head to demand her purpose.

But she was nowhere in sight, disappearing into the festive, milling crowd.

"Hot chestnuts!" A man with a cart barked from the corner, filling paper cones with his wares. "Git yer hot chestnuts here for ha'penny!"

The snow that had threatened all afternoon finally began to fall. Ah, that must be what he saw, when he thought there were feathers on the old lady's shoulder— the first snowflakes.

Scowling, he dug his chin deeper into the coils of woolen scarf inside his collar and limped onward. Into the softly falling snow and, by averting his course, into our story.