Cici wants everyone to have a perfect holiday, but she discovers things don't always work out that way. When a crying Chandra shows up at her home, Cici asks her alien boyfriend, the time traveler John Smith, if he can help mend Chandra's broken heart. John creates a time warp for Chandra where she can spend one more Christmas Eve with her late grandmother doing all the holiday things they loved to do, but, as usual, things quickly go south. The tinsel time warp grows and expands and threatens to take over the entire planet, and Cici is forced to go up a ladder when she's afraid of heights. Will time travel heal all wounds and make for a Merry Christmas for Cici, John, and even the melancholy Chandra? 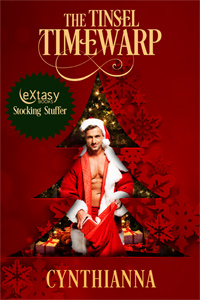 What is it about the holidays that drives us all a wee bit mad? Perhaps we wouldn't have found ourselves in such a mess on Christmas Eve if I knew.

John Smith—yes, that's my significant other's name, for better or worse—had agreed with me about taking a break from our autumn schedule of science fiction conventions and time travel adventures to return to my home in St. Louis. We attended a Thanksgiving party with our fellow Doctor Who fans there and, other than not understanding that turkey and dressing doesn't mean the roasted bird wears a coat and tie to the table, John behaved himself.

I'd better back up a second to explain in case you've not read my other memoirs of how I, Cici Connors, divorced, middle-aged, dyed blonde sci-fi fan, met the alien time traveler John Smith. John somehow can read a person's mind and project the image of him you want to see into your thoughts. It's much better than seeing him as his species actually is, unless you're into tentacles and drooling fangs.

Trust me, you don't want to see him that way. Ever.

Of course, being a big Doctor Who fan, I see John as my favorite Doctor at the moment. Right now, he oscillates between David Tennant to Christopher Eccleston to Matt Smith to Peter Capaldi and back to David Tennant and then Peter Capaldi again. That explains John in a nutshell.

I currently work for his business. We set up and run sci-fi cons. He, along with a couple of his alien pals, created the business to impress me and to give me a job after I was laid off. At first I didn't think I'd be good at organizing conventions, but it turns out I have a knack for it. I quite enjoy doing it, too.

The best thing about having a time traveling boyfriend is that after working a big sci-fi con you can take all the time off you like in between them to rest up. That's what we've been doing for several years now. We pop home on a regular basis to check on things with my friends in St. Louis, and I particularly like to celebrate the holidays there.

After the Thanksgiving party, we decided to stay put on Earth in the twenty-first century until after New Year's. It would give me time to catch up with the latest in science fiction fandom on Earth (as opposed to other planets we've traveled to) and help me prepare for our spring calendar of conventions in the Midwest.

But things have a way of getting out of hand when you forget your alien boyfriend has trouble understanding the complexity of human emotions. We should have ignored the knock on my door the evening before Christmas Eve, but we didn't.

"Whoever could that be?" I slowly extricated myself from the sofa where John and I sat watching a marathon of DC Comics superheroes shows. I grabbed the remote and hit Mute before swinging open the door.

"I'm sorry to drop by without calling or texting first, Cici. Can I come in?"

"Sure you can, Chandra," I flashed my favorite fellow Doctor Who fan a big holiday smile. "Come on in and make yourself at home. What's up?"

Dressed in her typical attire of ripped jeans and brightly patterned caftan top, Chandra schlepped into my cluttered apartment with an artist's sketchbook under her arm and her oversized tortoiseshell glasses halfway down her nose. I took her black parka and hung it on the coat stand.

Chandra currently worked as an up-and-coming graphic designer for an advertising firm, but she often created sci-fi and fantasy artwork on the side to sell at conventions and art fairs. Whenever we booked a media guest, we'd tell her first thing so she could design pictures featuring the actor or actress in their seminal role.

Her frown indicated something wasn't quite right with her current work.

"Hi, John." Chandra placed her sketch pad on the coffee table. "What's that you're snacking on?"

"Popcorn." He raised a silvery eyebrow and offered her the bowl of kernels and whipped cream—his favorite junk food. "Want some?"

She peered into the container and wrinkled her nose. "Uh, no thanks. I like my corn popped first and without the topping."

John shrugged. "To each their own."