Lady Ivy Plumthorne is a worry to her parents, the Duke and Duchess of Wythorpe. Desiring only that she be as happily wed as her younger sister, they've spent the past year parading prospective suitors in front of her. When she finds none of the suitors… suitable, her parents despair she will ever find the perfect husband. With Christmas approaching, they find one more prospective suitor, the Duke of Greenbriar. Only problem is, Ivy's already met the man of her dreams… and he's a toymaker.

Noel Phillip Vincent Greenstone, the Twelfth Duke of Greenbriar, isn’t cut out to be a duke. He prefers crafting toys that make children happy. As Phillip Green, he travels freely, making certain no child goes without a toy of his or her own. But after a few coincidental meetings with Lady Ivy, he knows he wants to spend the rest of his life with her. The problem is, she needs to marry a nobleman and she only knows him as Phillip the Toymaker.

The world needs to meet the reclusive Duke of Greenbriar, so Phillip plans his own coming out. But how will Ivy react when she learns the truth? 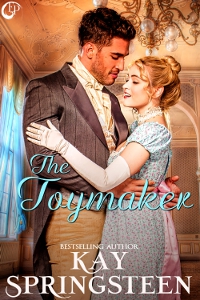 THE FINE RUSSIAN bristle brush carried the paint in a smooth line across the wooden doll’s head, outlining what would eventually become her face with a shock of brown hair. With a slow and sure hand, Phillip finished the dark cap with a little curl over the forehead and then set the peg doll into a drying rack he’d fashioned out of an old crate. From there, she and a half dozen of her sisters presided over the room.
He whistled as he worked, a habit he’d picked up as a boy, and one which his mother had never failed to remind him was rude for one of higher station. Strange, he’d not thought of his mother for ages. It must be the approaching holidays; she’d loved Christmas, had always made it special. The whistle trailed into a soft sigh as Phillip moved another rack forward and picked up one of the dolls resting in it. The coat of paint he’d applied the day before had dried nicely. He’d not need a third coat on this batch.
He picked up another brush, even finer than the first, and loaded just the tip with black. Using practiced skill, he applied tiny lines that formed eyebrows, dotted eyes, a C for a nose, and a pouty little mouth.
The case clock on the mantle chimed twice. Time to ready himself for his outing. He wiped the excess paint from his brushes and then dipped the white bristled ends into the spirits and swirled them around until the last remnants of paint had been removed. Then he laid the brushes on their sides to dry, untied his leather apron, and lifted it over his head.
His valet met him at the door, cradling a tweed tailcoat across his arms almost like he might hold an infant. “The gig is waiting out front,” he said, the words thickened just a bit by a hint of Genoa, Italy in his voice.
Phillip glanced down at his man with a smile. “Thank you, Eduard.” He smoothed a hand over his clothing, grateful to see he’d managed to keep it in order while he’d painted. Using the blacksmith’s apron had proven to be just the trick for keeping the paint off of him. How did master painters manage to remain neat and clean while they painted their portraits? Hmm… maybe such mundanity didn’t matter to them.
He slid his arms into the tweed tailcoat and brushed his hand along one sleeve to smooth it. Then he straightened his linen necktie and turned.
Eduard held out a greatcoat, careful as always to keep the garment from dragging on the floor by lifting it high over his head. Phillip accepted the coat and shrugged into it. He smoothed one gray wool sleeve where it bunched at his elbow, his mind already racing ahead to his appointment.
Eduard brushed at the other sleeve and then hopped off the sturdy wooden footstool they kept in the foyer and pushed it to the side with his foot. In a single fluid motion, he lifted a black umbrella from the iron stand next to the door and extended it with a flourish. “The mist is especially heavy today.”