The Trials and Tribulations of a West Coast Southern Belle

When southern belles gather, chaos reigns. TL’s life has been turned upside down, what with the loss of her job, the elopement of her best friend and the unexpected gathering of her mother and the Belle Rive Belles. The Belles drag an unwilling TL to Vegas, which has unexpected consequences for hotel owner Rafe McBride. Feathers and sparks fly as the non-southern belle and the strong, sardonic Rafe begin their thrust and parry into love.

CONTENT WARNING: Caution: includes an excess of feathers and rhinestones, some seriously dangerous drinks, and a caffeine addicted plant. Oh, and semi-graphic sex. 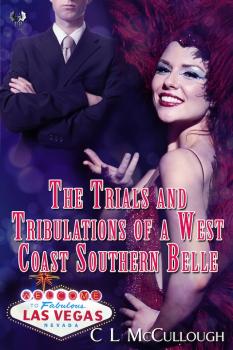 The Trials and Tribulations of a West Coast Southern Belle

About the time I found me a chair in which to deposit my disguise, Mr. Raphael McBride pulled himself out of the pool, almost smack dab in front of me.

Once there was a commercial. Now...I can’t quite remember what it was selling. Who could? The advertisers had defeated their purpose, because all I remembered was water sluicing down a tanned, toned, muscular, masculine body and thinking at the time that I’d like to lick up every drop. Here it was again, in the flesh right in front of me, and I had to admit I was feeling rather weak and had a bad case of clenching muscles.

At last I’d gotten to see his chest, not to mention his belly and his thighs. All of him was lightly dusted with dark hair exactly where it should be, slightly thicker across his chest, but really very symmetrical and it all converged and arrowed down to disappear beneath his swim trunks which almost weren’t there. Praise the Lord and hallelujah.

He grabbed a towel and began rubbing at his hair, which made all sorts of muscles do a little dance and dried up my mouth so bad I wasn’t sure I could speak.

“Turn around,” I managed to say. I had just had the most horrible memory of a football game far back in my murky past. The guy sitting in front of me had been naked from the waist up. He must have been a true football fan, because he’d been painted blue and had shaved “Go Spartans” in the thick hair on his back. He’d looked like a molting bear. Well...I just had to be sure.

“Thank you. You going swimming?”

“I was. Might drown now. Seems to be a lack of oxygen around here.”

“Me? Are you calling me a pushy woman, comparing me to what’s her name? I wouldn’t give you the pleasure, but I can surely admire the scenery, can’t I?”

“And I don’t fool around at all. You take a lot for granted, Mr. McBride. But it’s real sweet of you to consider the Belles family.”

“Do I get a chance to admire the scenery?” His voice was a low rumble. He took a step toward me and I took a step back. I started breathing faster and began to worry I might hyperventilate.

Screwing up my courage, I shrugged out of the robe and took off the hat and glasses. He took his time, moving his gaze slowly down my body and then back up. When his eyes finally met mine, the heat index spiked. I caught a bad case of shyness; brushing past him, I dove into the pool.