Harry Cannel, thirty-four, bound to a desk job and staring into the abyss of a failed marriage, suddenly finds his life changed after allegedly rescuing passengers from a doomed flight.

However, he didn’t do it alone. He had help from beyond—as in extra-terrestrial help—but the problem is, no one believes him. He becomes the butt of jokes, loses his job and his marriage, and finds himself an outcast.

Still, there is a mystery to be solved. Harry is determined to find out just who his helpers were. John, a stalwart strongman, and Linda, a dazzling redhead with whom Harry falls hopelessly in love with, are his quarry.

Along the way, Harry meets up with comic book aficionados, rabid fans, a man named Twitt, and a group of otherworldly beings that want him dead. He also discovers something inside himself that he’d suppressed for a long time—the wonder that dwells within all of us, the wonder of what’s really out there. 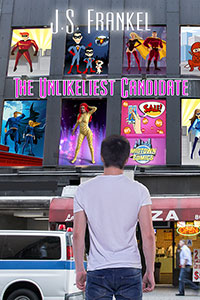 Harry Cannel, thirty-four, craned his neck to search through the shifting crowd for the person who’d spoken, his wife, Maggie. O’Hare Airport was a busy hub, one that served as a jump-off point to the west coast, and it was usually crowded. Today being a weekday, Thursday to be exact, it was no different.

However, Harry’s mind was not on the crowd or the noise or the movement or the heat. At six feet even, he had a decent vantage point from which to view things. However, his mind wasn’t focused on his wife’s sharply barked statement, but on an abyss which had abruptly appeared, a portrait, really, of early-onset middle age.

It depicted a stark reality—his reality—which meant a job that had gone nowhere, a marriage in decline with no children to show for it, and a wife who didn’t care. All of that overload rebounded from the unknown depths of the abyss and smacked him in the face, making him blink.

With a massive mental effort, he forced himself to back away from the pit. A more physical aspect of reality intruded when someone bumped into him from behind and jarred him back to the here and now.

The bumper, a fat, middle-aged man with a balding pate and an anxious look on his face, apologized. “I’m sorry, buddy,” he said, and took off in order to find his flight.

“It’s okay,” Harry said in a voice so soft only the wind caused by the movement of the other people moving to and fro could have heard it. He straightened up, and in an effort to take his mind off the downward spiral of his life, focused on the spot where Maggie was waiting. She wore a frown on her narrow, fox-like face. After seeing that expression of disapproval, it didn’t make him feel any better.

Married for almost twelve years, he’d read the warnings from the various experts that a man in his position would experience the proverbial seven-year itch. Even though it was five years past the deadline, he’d never contemplated fooling around. As the saying went, he was unflagging in his faith, although his faith had been sorely tested the last few months. No, make that years.

And it looked like it would be tested again as she tapped her foot impatiently. Even with all the noise around him, he heard the sound of her toes clicking on the cement. How she could actually manipulate her foot in such a manner was beyond his comprehension, but she managed.

Finally, in a fit of disgust, she waved her arm like a pennant flapping in the breeze, stamped her foot, and bawled, “Harry!”

Startled by her yell, he sheepishly ducked his head and grabbed the suitcases. Never mind how everyone stared, never mind how much she enjoyed showing him up in public either gesticulating like a wild-woman or screaming like the proverbial banshee, she did what she did and never, but never—ever—cared what anyone else thought.

There was nothing to do but to do it. He grabbed both suitcases, grunted, tugged, and then finally managed to haul the luggage over to her position more than slightly out of breath. Her frown deepened to the point where deep grooves stood out on her jawline like a jagged coastline.

As always, she’d gotten dressed in the latest brand-name fashions, a fashionable cream-white blouse and matching skirt, while he made do with a pair of jeans and a polo shirt. Her voice, when she spoke, sounded more cutting than usual. “Harry, you have to get a clue about these things. That fat little man, did he lift your wallet?”

It had occurred to him that the other man might have been a pickpocket, so Harry checked the rear pocket of his pants. Yes, the wallet was still there. “It’s all good.”

His wife still didn’t seem satisfied. Then again, she never was. “You do realize they called the flight, don’t you? It’s one o’clock, and it leaves in thirty minutes.” Her voice went up half an octave.

“Yes, I know.” After looking at the clock on a column in the middle of the airport, he figured that they still had more than enough time to make it. “It would have been easier if you’d taken one suitcase, Mags.”

Either she didn’t appreciate him calling her by her nickname or doing something physical, but whatever the reason, her mouth twisted up into a rictus of anger. “Harry, if you had any strength of character you’d know it was your job to do this. My parents will be waiting for us and you know we haven’t seen them for a long time. They’d be embarrassed to know their son-in-law doesn’t have the strength to lift two bags.”

“They never really liked me.” The words suddenly came out unbidden. No, upon reflection, the words were not unbidden, as his antipathy toward them had been building for some time. After thinking about it, it had started from the day they’d gotten married.

Maggie stared at him, aghast, her hand over her heart in a melodramatic gesture. If there was one thing she was good at, it was theatrics. “How can you say that?”

“Inviting me into their house and always forgetting my name has a lot to do with it. Calling me by your maiden name might also provide a clue.”

Maggie scowled, but a brief, grudging nod from her proved him right. She turned her gaze toward the contents of her purse and rooted around as if to find the secrets of the universe. Her search offered Harry a brief respite, and he took the time to reflect on the past few years.