By order of the king, each and every magical creature in the Heartwood is to be hunted down and destroyed. But Brendan Brightshield is not a man of war, and when he is wounded and the other huntsmen leave him behind. He awakes to himself prisoner to a young and beautiful tree sprite.

They come from different worlds, but can the feelings in their hearts outweigh their differences? Have they any chance at a happy ending? 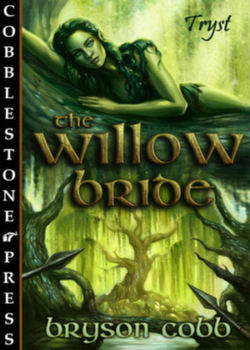 The pool was warmest at daybreak, heated by the secret sizzling springs far below. So, as the first rays of dawn appeared, ribbons of white steam were dancing on the gray-green surface of the water.

As she dove, her supple young body soaring through the air in a graceful arc, Willow laughed. She slipped under the surface with only the slightest hint of a splash. The tree sprite’s long green braids drifted behind her as she swam, gyrating in circles in the opaque jade water. Its color was not all that unlike that of her own soft skin. Her swimming attracted a school of tiny fish, and for a time, she drifted beside them, watching the sunlight glisten on their scales.

When at last she emerged, sucking at the morning air, Willow knew at once the forest was different. Something was amiss. The trees were anxious, their branches tense and leaves restless. A silver stratus blanket was rolling in overhead, bathing the scene in shadow. Willow took a deep breath and listened for the danger.

Suddenly, a flurry of wings and a snapping of twigs shattered the silence, and Willow gasped and leapt to the side. The steamy stillness of the pool was broken as rings of waves splashed over the black rocks.

“Oh! You scared me,” she said, touching her bare chest to calm her racing heart.

The bird that had caused all the commotion looked over at her through beady red eyes. It was a young moon owl, and Willow did not think she had seen it before.

“Hello. Where do you come from, little one?”

The bird opened its golden beak and answered with a high melodic whoo.

“And what brings you to Green Spring? Are you lost?”

The owl fluffed out its silver wings and shook violently before settling down and resting its head against its downy chest.

“There’s no need to be afraid. This is a serene place.”

Willow smiled at the timid creature, and the tension began to drain from its eyes.

“There now. All better.”

In a flash, the owl’s neck snapped upward, and it spread its wings to ascend, but it was too late. Something shot from the branches behind it, and the bird fell in a cloud of iridescent feathers. Willow’s breath caught in her throat as the fledgling landed in a bloody heap on the pebbles beside the pool, skewered by a black-quilled arrow.

The harsh voice echoed through the forest, followed by chattering and callous laughter.

Willow gazed down at the dead bird with eyes wide then turned and rushed from the pool. Water dripped down her naked body as she ran, her feet gliding from rock to rock.

“You hear that? Something’s in the clearing. After it!”

Willow sped up. If she could reach the trees, she would be safe. Though she had never seen one before, she knew what these new enemies were.

Why would they be this far in the woods? And why kill a helpless moon owl?

The thoughts raced through her mind, yet she knew there was no time to dwell on them. Willow had heard tales of these strange weapons that threw death from afar and knew she had to make it into the haven of the branches high above.

Humans were fast enough on foot, she knew, but moved like sloths in trees. And so, just before the hunting party reached the clearing, Willow leapt to the crispy brown bark of a hickory and scampered up. She moved in a flash of green, her fingers flying over the surface of the wood. Once she reached the branches, she wove silently through them, snaking around the trunk. She reached the thick, rustling leaves at the top of the mighty tree and nestled among them. There she sat, panting and staring down at the strangers that emerged from the wood.

There were about a dozen of them, and they were more bizarre then she could have imagined, with huge shoulders and hairy arms and thick, bushy beards. The first to approach the poor bird was the biggest and ugliest of all. A crossbow lay across one arm, and he glowered down at his kill.

“Scrawny little bugger, ain’t he?” laughed an axe-wielding man behind them. “Still, should buy you at least one whore, Captain Bloodstone, though she’ll probably be old and fat with black teeth.”

The big hunter called Bloodstone growled at the other man before leaning over and lifting the bird. It looked so small and wilted in his big hand, and Willow’s eyes filled with tears. The hunter yanked the arrow out from the tiny body and stuffed the owl into a leather bag at his belt. A dozen other bags hung beside it in a brown bunch. Willow put a hand over her mouth to keep from crying out.

Who are these devils that kill so freely and so carelessly?

“Come on!” howled the captain. “Let’s find whatever frightened beast made all that racket. Into the woods!”

One by one the hunters passed below her perch in the hickory tree. She watched them angrily, gritting her teeth at the long spears, sharp swords, and bloodied axes they carried. But the last of the party was different; she could tell from afar.

He was carrying a crossbow, a huge mechanical weapon that looked heavy and awkward in his hands, but everything else about him set him apart from his barbaric companions. He was younger than the others, beardless, with hair as gold and soft as angel wings. His clothes were different too. Whereas the gruff hunters were clad in furs and rawhide and black ring mail, this man wore a crimson tunic and boots of boiled leather. And, even from afar, Willow could see his eyes were different. The others stared at the path ahead or else scanned the trees for things to kill, but the pale blue of the golden-haired man’s gaze was different. He stared at the green pool as he passed, smiling, and watched the swaying branches of the surrounding wood with fascinated admiration.

The young human seemed to fit in better amongst the trees than he did with his fellow hunters, and perhaps this was why Willow could not look away. She knew it was a foolish thing to do, but as the hunters marched deeper into the woods, Willow followed, hidden above in the camouflage of the green leaves.

She was relieved that they found no more prey on the journey. Perhaps the noise at the spring had warned the other creatures. The woods were still and silent, and she had to move very cautiously not to make a sound. But it was growing hard to do so. They were heading north toward the edge of the Heartwood, the forest she called home, and the trees were growing sparse. She jumped betwixt the thin limbs of elms and the soft needles of spruces, her eyes ever on the young hunter ahead of her.

He moved slower than the rest and soon trailed far behind them, wandering through the maze of tree trunks and thorny bushes. And nearer and nearer came Willow until she could almost reach out and touch his tunic with her fingers. This was a dangerous place for her to be, too close to the hard earth and open path where she might easily be shot down, but she didn’t care anymore. Her curiosity drove her on and made her careless.

It was the tiniest of mistakes, a mere slipping of one foot, but enough. Willow reached out to balance herself and put too much weight on a small branch. The twig bent and snapped.

In an instant the hunter spun, raising his crossbow so that the arrow’s tip aimed between Willow’s breasts.

She froze, gaping at him in terror.

Willow’s skin was as green and silky as the leaves around her, but the camouflage was incomplete. She had not bothered to hide the glint of her bright eyes or the white of her teeth, and it was not long before recognition and awe appeared on the human’s face.

“What is it?” asked a booming voice from far ahead. “What do you see?”

The young man was panting, his finger tight on the trigger of his crossbow.

“N-Nothing!” he finally answered. “A squirrel, that’s all.”

Willow felt her head grow light. She gripped her fingers around a branch to keep them from shaking.

Slowly, the golden-haired man backed away from her and lowered his weapon. After a moment he nodded to her then turned and jogged off after his companions.

Willow let out a long, deep breath and dropped lightly to the ground. Her teeth were chattering.

She did not have long to rest, however, before a new cry tore through the woods.