Widowed in the Great War, Amanda McMahon’s life revolved around her work and her son. She had little understanding of passion and, despite her material successes, was envious of Lizzy Vernon, a young typist working in her offices. Lizzy was free in ways Amanda was not, and experienced in sensual indulgences. 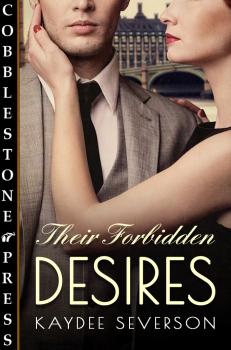 Amanda McMahon looked at her slender gold watch and sighed wearily before putting the timepiece back into her small purse. It was 4:30 p.m., and she was returning to her office at Themes Investments. How did lunch suddenly become something that didn’t happen until 3:30? It seemed like everything was piling up.

She’d already put in an exhausting nine-hour work day, and she knew that if she had any common sense at all she would forget about work for a few hours, go back to her lovely three-bedroom flat, and pour herself a glass of sherry. Experience had taught her that a break from work of one or two hours would make a positive difference in her mood as well as improve her productivity.

She paused for a moment as the receptionist was logging the last in-coming telegrams of the day. The receptionist shook her head, indicating that Amanda didn’t have any messages. Amanda, clutching her briefcase and letting her shoulders sag for a moment, was glad that at least there wasn’t anyone waiting impatiently for her to return a message.

“Good night now,” said a man with mutton-chop sideburns, passing by Amanda as he headed for the stairs.

She tried to remember the man’s name, but the answer eluded her. He was about her age and was head of one of the departments, but she couldn’t remember which one. At thirty, Amanda was the youngest of the thirteen key executives in the entire organization of Themes Investments. It was a position and title that she was proud of, though all the hours that it had taken for her to earn the cherished vice presidency had taken its toll. A failed marriage, which had ended with her husband’s death during the Great War, was one price she paid. She began to suspect that there was something distinctly portentous in the fact that there were thirteen executives to the company—and she was the thirteenth.

Sometimes Amanda wondered if it was all worth it, whether living life as an emancipated, educated woman did, in fact, cost a woman more than any vice presidency could possibly pay back. After all, she was a reasonably young and attractive woman, earning a more than substantial income. She kept telling herself that she should be happy—but she wasn’t. Her husband had died in the Great War. Now, her brother-in-law was busy spending her money on prostitutes, alcohol, gambling, and for various mistresses he had tucked away in London. He was, in effect, her overseer since a woman under thirty couldn’t own property in England.

The saving grace of her marriage, which had never been happy, was Nicholas. The boy, four years old and already reading his primer by himself, was the one constant in Amanda’s life—and she had done everything she could to protect her son from his father when he was alive. She now tried to protect him from the uncle that she was certain cared nothing for him, only seeing him as a bargaining chip to tap into the fortune her husband had passed down to her.

Whether it was her professional career or some other reason, her marriage had dissolved disastrously into hellishness before her husband’s death in the War. She spent her nights alone with her papers and her endless margin figures, projection charts, and the always-unpopular profit and loss reports.

As she approached her office, Amanda noticed that the heavy oak door was ajar an inch, which surprised her. She believed in an open-door policy for herself and the people who worked for her, and that meant that she never closed the door unless it was necessary for privacy. Besides, as a woman, a closed door had the potential of leading to gossip.

Her hand was on the doorknob, and she was just about to push the door fully open and walk in, when she heard the soft, gay sound of feminine laughter coming from inside. Amanda stopped, her brows furrowing in confusion. Then she heard another laugh, this one softer but deeper, and she realized that there were people in her office. Apparently not using it for purely business purposes.

In the next three seconds, a thousand different thoughts and emotions went through Amanda. Part of her wanted to rush into the office and thoroughly castigate—or maybe even fire them right there on the spot—the persons trespassing in her office. But there was another part of her that was curious. Who would be so bold and daring as to go into her office while she was away? Since both a man and a woman were laughing, they had to be laughing about something. Were they laughing at her? It was a lacerating thought, and though Amanda tried to banish it instantly from her consciousness, she couldn’t.

Laughter, during business hours, was something that Amanda hadn’t done in so long she couldn’t remember the last time it had happened. So wrapped up in her career and proving herself a capable professional in a man’s world, she couldn’t remember when she had experienced anything other than tension.

Slowly, cautiously, she stepped closer to the door, peering through the narrow opening into her own office, fearful of what she might see but drawn by an unseen force she could not resist.