This Woman Is Dangerous

This Woman is Dangerous by Landon Dixon

A patient is on the loose from Agnews Insane Asylum, but military-man-turned-cop Frank Drury isn’t afraid; nothing ever happens in his sleepy patch of the Pacific Coast Highway, especially on the late shift. Until the speeding car disturbs his steamy trip down memory lane... The driver Nancy almost fits the runaway patient’s description perfectly, apart from her blonde hair... Frank decides to carry out an in-depth interrogation to find out more about the woman beneath the nurse’s uniform.

As soon as Kirsty heard that a local property developer was restoring the rundown 1920s cinema in the town centre, she immediately applied for a job – and not just for the sexy usherette outfit. It has been a lifetime dream to work in a classic picture-house, but the glamour of watching the same films over and over quickly starts to wear thin. At least she now has the man from the “cult classic nights” to keep her entertained... This screening is most definitely going to be X-rated!

Jessica is having a wild hen-weekend in Eastern Europe when her night-out takes a dramatic change of course. One minute she’s dancing with her friends in the nightclub, and the next she’s being bundled out by the bouncers and is in the custody of policewoman 5727. It’s only once the Amazonian officer leads her down a dark alley away from the police station that the bride-to-be realises that this law-enforcer doesn’t always play by the rules – but what’s surprises Jessica even more is that she can hardly wait for her punishment.

An Itch to Scratch by Tara S Nichols

The waiting room is full of wacky costumes, from witches to Wookies. But just as Alex is bemoaning the fact his prescription renewal fell on the day of Halloween, things start to look up when the smoking-hot nurse calls his name. She wants to run a physical exam, but is there more to this examination than meets the eye? Alex sure hopes so... 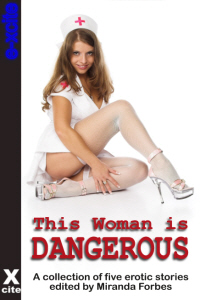 This Woman Is Dangerous

There was hardly any traffic, anyway. It was a cool, cloudy night, a Wednesday, the only bulletin to come over the radio about some lunatic who had escaped from the Agnews Insane Asylum 20 miles east in Santa Clara. White female, age 26, black on blue, 5'6" tall, 120 pounds; convicted of jealously killing a man when she’d found him back in the arms of his loving wife, spared the death penalty pending a long, peaceful stay at the asylum. ‘This woman is considered dangerous’, the dispatcher had concluded.
But Frank wasn’t concerned. They’d probably find the dame squirrelled up a tree not far from the nuthouse. The big, curly-haired galoot grinned, stars in his big, brown eyes, hand shifting into fourth on his cock, riding it hard, balls against the warm leather seat tingling.
A car shot by on the highway. Frank blinked, cursed. He tucked his hard-on back into his pants and kick-started his motorcycle. You just couldn’t ignore a car doing 80 – with no lights on. The motorcycle roared to life, and the engine throbbed a fat, wet chorus between Frank’s muscular legs.
He rolled out onto the road and gunned it, zooming after the speeding shadow, all his lights on and siren wailing. And he easily caught up to the darkened car on a curve, signalled with a gloved hand for the driver to pull over.
She did, finally turning on her own lights when Frank skidded to a stop in front of the car, on the gravel shoulder of the road. He was briefly spotlighted in her high beams, unable to see, the vehicle’s powerful engine racing.
He strode out onto the road and over to the driver-side door of the car. ‘What’s the big idea, speeding with no lights on? You trying to kill yourself!?’
It was a Buick super convertible, black as the night, polished like the stars. And the woman behind the wheel was even more stunning: a slim, sleek figure dressed entirely in white – a nurse’s uniform – blonde hair haloing her head, a perfect oval face smooth as a cameo, large blue eyes and lush red lips. Her arms were bare in the crisp uniform, slender and lithe, like her legs, which flowed out of her short skirt in shiny white stockings.
‘I’m sorry, officer,’ she pouted, glowing in the beam of Frank’s flashlight. ‘I was just in a hurry, I guess, not thinking about what I was doing.’
‘Uh-huh.’ Frank stared at her breasts, taut mounds wrapped tight by her uniform. The nametag above her left breast read: Nurse Nancy Tate. ‘You work in a hospital?’
She looked up into the light. ‘A kind of hospital – the Agnews Insane Asylum.’
Frank’s gloved hand caressed the butt of his gun. He licked his lips. ‘Yeah? I hear one of your patients escaped tonight.’
The woman smiled coyly. ‘Yes, she did.’
Frank cleared his throat, gruffly said, ‘Wasn’t you, huh?’ The height and weight measurements looked close, and a quick dye job could’ve taken care of the hair.
She laughed, like the tinkling of bells. ‘Sometimes it feels like it – when I finally get off. But this is my car, Officer ...?’
‘Frank Drury.’
‘Frank. And I’ve got my identification in my purse, if you would like to see it.’
Frank shone his beam onto the steering column, bent his head down to read the registration. And sweet jasmine flooded his senses, as Nancy squirmed slightly in her seat, the living, breathing, pulsing picture of femininity, her warm body so very close. It’d been a long time between women for Frank, too long.