Tiger, Tiger by Paige Roberts David is searching for the Indian tiger goddess, but to find her he must spend a night tied to the stone table in the jungle clearing – an ordeal he may not survive. As the noise of a tiger’s roar comes closer, he struggles against his bonds. But when the animal’s form appears to change into that of a stunning, naked woman, David realises the goddess’ caress is to be welcomed, not feared, even if it costs him his life...

My First Time by Eva Hore Rita’s not supposed to enter the room with the black-painted door when her boyfriend’s not around, but she can’t resist showing Doris what’s inside. Doris can’t understand why anyone would want racks and ropes in their home, until Rita persuades her to try them out. Just as she’s getting in the swing of things, Rita’s boyfriend comes home. Together, they will show Doris exactly what it means to be tied and teased.

Dangerous Games by Eva Hore Her boyfriend has promised her a night she’ll never forget, and it begins when she follows his instructions to put on lingerie, blindfold herself and wait for his return. When David joins her, his unfamiliar aftershave lets her know he’s playing some kind of game, but as she succumbs to his deliciously rough play, she has no way of knowing the truth of the situation.

Fantasy by DMW Carol She loves roleplaying for him, and she knows exactly how their next session will go. She wants to play the part of an innocent, virginal schoolgirl, ripe and ready to learn about sex, and as her imagination runs wild, she lets her lover initiate her into the thrill of bondage, too...

Picket Fence by Sommer Marsden De-cluttering the attic, Nick finds a Polaroid camera he can’t bear to throw away. Noel can’t fathom his fascination with the thing, until the night he uses it to take some very raunchy photos of her, naked and bound. Photos that have a very powerful aphrodisiac effect on anyone who sees them.

Change Of Life by Cathryn Cooper Men have treated Mariana so badly she now only uses them for her own ends, finding real pleasure with her friend and lover, Sharaz. While she’s sharing a sensuous sauna with Sharaz, discovering all the things two women can do to each other, her husband is restrained at home, patiently waiting for her return...

La Cage Aux Folles by Kaycie Wolfe Sex therapist Merril helps other people mend their lives, but her own needs more than a little work. Escaping from the cage of her failing marriage seems like the ideal solution to all her problems, but not before she’s dealt with her self-absorbed, cheating husband in a highly appropriate fashion.

Travel Broadens The Mind by Kirsten Schubinski The bus journey took her through rebel country, where kidnappings are rife. She never believed it could happen to her; now here she is, chained in a cell and being looked after by a jailer she has never seen. How will she react when he starts to treat her as a lover, rather than a captive

After Hours by Kristina Wright Natalie’s had a rough week at work, and Ryan is sure the way to relieve her stress is with sex on his office desk. Initially afraid they’ll get caught in the act, Natalie soon relaxes into the moment – then Ryan produces a length of rope so he can tie her in place...

In The Saddle by Primula Bond Invited to spend a weekend in the country by a man she barely knows, inveterate townie Angela knows it’s going to be a complete disaster, until she finds the estate’s tack room. Aroused by the scent of leather, she can’t resist lewdly riding a saddle like it’s a bucking bronco – only to be caught trespassing by a stable hand intent on punishing her for her naughty behaviour.

Festival by Cyanne She’s looking forward to engineering the sound at the music festival; even more so when she learns she’ll be working alongside Irish hunk Sean. He’s enigmatic, totally in control and maybe just a little bit dangerous. And his way with cable ties and gaffer tape leads her into a sexual encounter like none she’s ever had.

Political Prey by Jim Baker When David knocks on her door and canvasses Susie for her vote, she soon realises he’s her ideal man – a young virgin who’s willing to be tutored in how to give a woman pleasure. But Susie’s methods of domination go way beyond the norm, and as far as she’s concerned, his most important asset is that he’s unlikely to be missed... 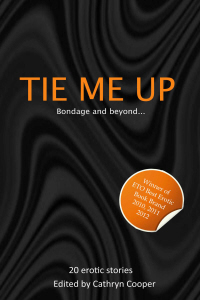 The boy was beautiful. He’d come to stay at the insistence of a relative.

‘Francis needs somewhere to stay – it’ll only be for a while. Besides, it will do you good. Make you behave yourself instead of using these women the way you do.’

His aunt had been insistent. She was old and wealthy and he had no intention of upsetting her.

She was right of course; he did treat women badly. He expected and got total submission. They’d nibble his toenails if he asked them to. He was handsome, rich and never lacking for female company – physical contact only. Nothing emotional. He preferred variety for the sort of sex he enjoyed.

The boy was an encumbrance he would learn to live with. Shut him away in a room in the east wing, and that would be that. Or so he thought.

The boy, a lad of not much more than sixteen it seemed, had other ideas. Everywhere Carew went, Francis was there at his elbow.

At first it annoyed him, but over a period of weeks something happened; for a start he registered just how attractive the boy was. His hair was dark blond, soft and silky, falling over his temple in a gentle wave. His eyes were of the rarest blue and fringed with dark lashes. His lips held the sensuous lines of a courtesan, full, wide and the colour of crushed rose petals.

In the beginning he had sought to escape the boy’s company, but as time went on he found, much to his unease, that he sought the boy out, missing him when he wasn’t around. And that smile! That soft hand easing into his, the round bottom, the hairless chin and even the scent of the lad were intoxicating.

At night he dreamed; wet dreams that he’d been inserting his cock between boyish cheeks, kissing that sweet, girlish mouth. His desires sickened but also tantalised.

His friends began to notice.

‘Are you turning the other way?’ asked one of his friends. ‘It’s been noticed that you’re spending more time with the lad than with the ladies.’

Carew fixed him with an icy glare. ‘How would you like your nose rearranged?’

The friend had laughed and pretended it was all just a joke, but Carew knew it wasn’t. They had noticed his behaviour and losing face worried him. His reputation as super-stud was at risk. It embarrassed him. He had to do something about it.

Priscilla Palmer-Tovey arrived at ThompsonTowers on the dot of seven. Like any parson’s daughter, Prissy was polite, punctual and, although not exactly plain, she wasn’t beautiful either. Carew watched her walk up the drive, straighten her hat and smooth her dress before she rang the bell. Priscilla was neat in dress but not prim when she was out of it, and at times that suited him very well indeed.

He smiled and drained the lingering dregs of whisky from his glass.

There followed a gentle knock on the door to his private sitting room which was on the first floor and had high lead-paned windows and wainscot panelling. Imran, his servant entered, bowing before making his announcement.

‘As her to come up, and, Imran, tell Master Francis that I wish to see him.’

He poured himself another drink to help drown the confusion deep in his groin. He loved women. He knew he did, so why did the boy unnerve him so much and make him think otherwise?

‘Don’t worry, old chap,’ he muttered to himself. ‘With Priscilla’s assistance, it will be confirmed before the boy’s very eyes. He’ll not mistake your meaning, old boy. He’ll get the message that you want no more of those doe eyes and come-on looks. Good God, didn’t you leave all that behind you at boarding school?’

e’ll not mistake your meaning, old boy. He’ll get the message that you want no more of those doe eyes and come-on looks. Good God, didnGood

A peel of laughter preceded Priscilla’s entrance. She rushed into his arms, her face flushed and hot beneath his lips.