To Fly An Eagle

To Fly An Eagle by J Manx

Every new generation thinks it invented sex anew, and every old one quietly smiles and thinks, “if only you knew.” A grandma recalls her first flying lessons with a handsome American pilot. Well, he called it flying.

Fire Down Below by Landon Dixon

Sleeplessness is a bitch to beat, but it’s even worse if the only thing you want in the world is an orgasm… the one thing that your partner has decided you cannot have.

It’s hard when you’re just starting up your own business. But the man who’s waiting at home for you is going to be even harder. Tuesday makes amends to her husband for her absences.

Two online lovers meet for the first time, and find out that sometimes, real life beats the fantasy hands-down. 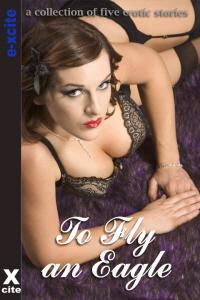 To Fly An Eagle

It was June 1942. I was nineteen.
‘Can I see you again?’
I hesitated, not knowing how to react. I’d never been asked out by a man before.
It was the end of a thrilling evening. A dance. The first I’d ever been to and it was the first time since the war started that I’d had such heady fun. There were a lot of men from the Biggin Hill air base, but he stood out. He breezed into the village hall with two others, laughing and loud, and every girl noticed them. They stood in the middle of the floor as if they owned the place and he looked around and his eyes fell on me and my girlfriends and a big, bright smile spread across his face. He nudged his friends and walked over to us.
‘Could you teach us how to dance?’ he said. And he was handsome. He had friendly, Clarke Gable eyes and an Errol Flynn chin. He had Hollywood style. Of course I said yes. Coyness, playing hard to get, had its place but not if you might never see them again. He turned my head and left it spinning. He danced with me all evening.
Johnny Genarro. ‘What kind of name’s that?’ I’d asked.
‘My father’s Italian, my mother’s Irish, a passionate mix, could only produce a passionate son.’
Everything about him reflected his love of life and he just carried me along.

The orchard, that’s where he took me that first time. Mum was a bit unsure, had circumstances been more normal I don’t think she would have let me go. But this was wartime and Dad was away fighting and I think she thought why the hell not? And she could tell Johnny was OK, he won her over with his warmth. ‘We’re just going for a drive, Mrs Carter, won’t be long; I promise we’ll be back within the hour.’ And he was, although it seemed like five minutes. He picked me up in a car he’d borrowed from his base. There were hardly any cars around in those days, we had the road to ourselves. And he took me to the orchard and it was there that I tasted my first kiss. I can still taste his tongue, the shock and the pleasure, and his mouth on my neck and the thrills coursing through me. Those first few times he took me back home spot on time and left me longing to feel him again. After a couple of weeks he got bolder.
‘Is it alright if I take Janey for a picnic tomorrow, Mrs Carter?’
Mum was a little reluctant but she agreed. So he picked me up, gave Mum some tinned meat and he took me for a picnic and taught me how to fly.
He’d spread out the blanket and we sat down and then he took me in his arms. We kissed and I felt his shoulders and back and rough chin and the smell of his oiled hair and his masculinity, there was no deodorant in those days. I pressed my body into his, feeling its warmth and strength and his hands were on my hips and waist and bit by bit moved over my bottom, caressing then gripping. Without realising, I’d opened my legs and his hips were between them and I could feel his hardness and I wanted him but I knew I shouldn’t and I had to push him away.
‘What’s the matter, babe?
‘We shouldn’t, I want to but we shouldn’t.’
‘I’m sorry babe, I just got carried away, you’re so gorgeous. Here,’ he said, leaning back and spreading his legs, ‘look what you’re doing to me.’ He nodded down to his crotch. I could see a large bulge in his trousers.
‘Is it uncomfortable?’
He undid his trousers and released his cock. It stood proud and rigid in front of me.
‘Not any more it’s not,’ he said, smiling, a glint in his eye. I’d never seen a cock before. I was surprised by its size, it looked regal.
‘Do you like it babe?’ I was fascinated. ‘Why don’t you touch it? it won’t bite.’ He laughed. I reached out and touched the tip. It twitched. I withdrew my hand, giggling.
‘Do you know what a joystick is, Janey?’
I shook my head.
‘When we fly planes we use a joystick to direct the plane. You move it around to control the direction of the plane. Now, if you learn to manage a man’s joystick you can take him anywhere you want. Would you like me to teach you?’
He was still smiling that wicked smile and I laughed and nodded.
‘OK, babe. First of all take a firm grip. Go on.’
I curled my fingers around his cock and was surprised by its warmth.
‘That’s it, babe, just a little higher.’
I adjusted my grip and felt the ridge of his glans under my curled forefinger. ‘That’s it, babe, perfect, now I’m ready to fly.’
I could feel his cock pulsing in my grip.
‘Now, babe, with a plane’s joystick you move it from side to side and back and forth, but with a man’s joystick you move it up and down. Just give it a try.’
I moved my hand clumsily up and down his cock.
‘Oh, babe, that’s wonderful …now, a little bit faster.’ He lay back and I watched his eyes shut and his hips push upwards as I moved my hand up and down his hard, warm cock.
‘A little faster, babe, that’s it …oh, babe …that’s it.’
And then he bucked and ejaculated a spray of white semen and he cried out and I screamed in surprise. No one had ever told me about this. He laughed and I fell back giggling. He sat up.
‘Oh, Janey, that was fantastic.’ He cupped my chin in his hand and kissed me.
Johnny gave me a lot of flying lessons after that. It was such fun. I learnt the basics first, grip, tempo, pressure and having mastered these I moved on to other areas. And somehow my mouth was drawn to his cock. Delicious. Smooth, warm and so beautifully hard and I loved the way it deflated after I’d drawn its precious juices. Then I’d stroke it back to its full magisterial poise and we’d start all over again.
And then the time he brought me to orgasm. I was on my knees, my head bent over his lap, one hand cupping his balls, the other gripping his cock. He’d been running his hand under my dress, up and down my thigh, brushing over my bottom. I was becoming agitated, I knew I shouldn’t let him go there but my pussy was juicy and aching to be touched and I raised my bottom slightly and his fingers had eased themselves inside me. I sat on his hand and his fingers wriggled and played me to orgasm and all I could do was hold on to his cock and cry out into the summer air. After that, there was no stopping me. He christened me ‘Plane Jane’, and I got to fly him regularly, and his flying lessons became the focus of my life.