To the Hessian Hills (MM)

A Hessian mercenary soldier’s tale of his experiences in the American Revolutionary War.

Young German art plasterwork apprentice in the Lower Saxony town of Lüneberg, Johann, enlists to go fight for the British in America. His motivation in doing so is to remain one step ahead of the artisan master husband of a scheming and unattended young wife as well as the anger of the ducal father of a promiscuous and bored young son.

As Johann travels across the ocean to the New York Colony, then through the disastrous British defeat at the Battle of Saratoga, and, finally, on foot in the snowy winter south as a prisoner of war to what became the Hessian Hills in central Virginia, he not only finds a loving relationship with an old friend, August, who has come to America with him, but also learns what he need sacrifice to continue to exist.

Along his route in life from Germany to Virginia, Johann increasingly finds he needs protection from other men whose primary interest is in finding a desirable and willing vessel for their seed. Men such as Rudolf, his artisan master; an unknown recruitment officer; Jocko, the ship’s third mate; Reinhart, the hard-hearted and hard-bodied troop captain; a medical surgeon; and Lawrence, the possessive, cruel, and demanding prisoner guard.

Despite all of the hardships of a prisoner of war in the American Revolution, Johann fights hard to maintain faith in the future. And in his dream for stability and a loving relationship; whilst moving ever closer to the Hessian Hills. 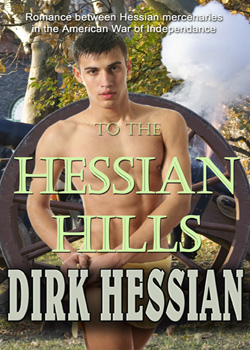 To the Hessian Hills (MM)

As the units entered the dock area, they were being directed to their assigned ships. And it was here that Johann’s infantry company met up again with the Lüneburg artillery unit—and with Johann’s friends, August and Claus. The three friends would be crossing the ocean together.

Until the artillery guns were on board, however, the infantry unit had to stand at ease, but in formation, on the dockside. Moving the guns onto the ship was no simple task, however. Johann would have thought that the infantry soldiers would help with that, but the separate units did not mix. If anything, the artillerymen felt too much the elite to permit simple foot soldier anywhere near their guns.

They couldn’t get the cannons on board the ship, however, without the expertise of the ship’s crew, so they could not reject this help. Johann and his infantry comrades stood and watched as wide wooden ramps were put into place against the side of the ship, running from the dock to the gunwales. Smaller ramps descended from the gunwales onto the deck of the ship. The guns would have to ride on the deck, covered with tarps, and tied down to keep them from moving. If a gun broke loose, it would cause considerable damage and havoc to the ship’s rigging and was likely to plunge into the sea.

The artillerymen and the ship’s crew were stripped down to the waist for the muscle-challenging chore of moving the guns, on their caissons, up the ramp from the dock and then back down onto the deck. Working with the guns was a muscle-bulging exercise in any event. Johann, with his new-found experiences in sex between men, now looked on his friend, August, in a light in which he’d never seen nor considered him before. August was a tall, broad-shouldered, Teutonic, magnificent specimen of manhood, just as Johann, on a smaller scale, was—but more so in nearly every aspect. The work he’d done in the artillery unit already had served to add and further defined muscle. Seeing him stripped to the waist as he was now aroused Johann in a way that he now understood.

Claus also was well muscled and handsome, but he was dark and hirsute, where August was blond and with a hairless torso, and he was more wiry than bulky. And Johann sensed that Claus was not for him—that Claus perhaps preferred to have another man inside him much as Johann realized now that he had been fucked by Rudolf and had fucked Werner. With Johann’s new-found understanding of an interest one man could take in another, he was able to discern that the looks and touches in working together between August and Claus to move the guns onto the ship signaled that they were a pair.

Johann slightly regretted this. He and August had been moving toward each other before Johann went to Rudolf as an apprentice. Johann didn’t understand then that they were developing an affinity for each other, but he understood that now. But now it seemed like the opportunity for that had passed. August and Claus seemed the pair now.

Johann’s eyes cast over the other men working on moving the caissons, and they stopped on one of the sailors. A roughly, but magnificently built British redhead seemed to be directing the effort—but directing it from the position of the most-dangerous and muscle-challenging position. And he had the musculature to accord him ascendance among all of these well-built men.

Once Johann laid eyes on this man, his attention only momentarily was able to turn elsewhere until the guns were on deck, covered in tarp and tied down, and the infantrymen, at last, were being marched up the gangplanks and on board.