To the Lighthouse: Towers of Gay Love

A message came in to writer of gay male stories habu from his editor noting that he’d had two lighthouse-based stories published, “The Lighthouse Keeper” and “The Whisper Man,” that had done well and did he have any more lighthouse stories in his portfolio? He didn’t, but a year later we have four new stories to add to the existing two in the To the Lighthouse anthology. Some of the lighthouses used for locations in this collection are real ones, some are real ones moved to different locations. Some, as in “Escaping the Lighthouse” and “The Lighthouse Keeper,” have personal connections to the author. One, “The Whisper Man,” is taken from legend, and one, “Lighthouse in the Desert” isn’t really a lighthouse at all. What habu has striven to do with this collection is to take a very specific setting, a lighthouse, and provide a variety of gay male literature themes and applications of location to stir the pleasure and interest of the reader. Tags: Rock Hudson fantasy, age difference, anthology, big cocks, black bulls, bondage, Boston, celebrity scandal, comfort, corruption, danger, deception, desert, drama, drugs, escape, first time, gang bang, gay anal, gay domination, gay male hunks, gay romance, gay seduction, historical, initiation, interracial, isolation, lighthouses, male brothel, military school, motorcycles, movie stars, mystery, Nags Head, politicians, prep school, protection, redemption, rent-boys, rock bands, stalking, surrealism, voyeur, weddings, Wilmington. 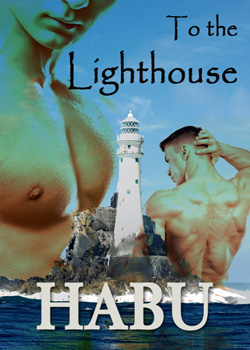 To the Lighthouse: Towers of Gay Love

“OK, I’m not out here just for sex—as nice as that is. I’m out here to save your skin.”
“How do you figure that?” I asked. “You’ve done everything to me but flailed my skin off.”
“Why do you think you’re out here, water all around, all by yourself, with no means of your own to go someplace else?”
“Because I’m studying lighthouses?”
“That’s the reason why an isolated, off-shore lighthouse was chosen—was manipulated into your mind—but who chose this for you?”
“I don’t know what you’re getting at.”
“I think you do.” He was right, I was pretty sure I did. “Did you track down this lighthouse as someplace you could go to be out of the way for the coming election, or did Senator Robert Bromley pick it out?”
“Bob showed me the brochure and offered to pay for it, yes. But I really am studying lighthouses. There really is a good reason to be here. And what do you know about Senator Bromley?”
“One of the better reasons is to have you out of the way during the election,” Scott said, ignoring my question. “And the best reason of all is to have you isolated somewhere where it would be easy to do away with you and just have you float off toward Europe. I’m sorry to be blunt. But there it is. You are a liability to Bromley now that he plans to move up in status and to Washington. You didn’t think he’d take you to Washington when he went, did you? He’ll need his showcase family there. He certainly won’t need a male rent-boy. And when he does need rent-boys, he chooses ones that know their way around the Washington shark pool.”
“That’s quite a charge,” I said. If I’d said it more convincingly, though, I might have convinced myself he couldn’t possibly be right. “Even if so, what’s it to you?” I asked.
“I’ll level with you. I’m working with Julia McVee’s campaign against Bromley. We’d like you to come over to us. We wouldn’t have to take this public. The mere knowledge that you were with us, being protected by us, would make Bromley back down. He’s involved in so much illegal crap, anyway. We could help get you out of this and serve the people of Massachusetts at the same time. We’re not just making guesses here. We have informants who say there’s a hit out on you. That you know too much that Bromley and his associates don’t want known. We could . . . what’s that? Did you hear something?”
“Just your boat scraping against the side of the lighthouse. Just the waves—”
“There are no waves. The water out here is calm. There. Hear that?” He was out of the bed like a jackrabbit and pawing around in his clothes. He came up with a handgun.
“Hey what is that—?” But then I saw it just as Scott did. A face appearing at the top of the stairs from the lower levels. A raised handgun. Scott fired a shot and was off toward where the intruder, now disappeared, had gone.
I stayed put, paralyzed and in shock. I heard more shots and then nothing. After a couple of minutes Scott reappeared and I let out a long breath, realizing only then that I hadn’t been breathing in the seconds, which I thought were hours, that he was gone.
“He got away, but I think I might have winged him. Who do you think—?” he started to say, but I interrupted him.
“I recognized him. He’s Bob’s fixer bodyguard, Stan. OK, so I get your point,” I answered.
“Did you, really? Did you notice that he came, gun drawn, thinking you were the only one here?”
“Yes. I said that I got your point.”