In the early 1990s, no one talked about transgender people, and no one knew one. We were not on TV or in movies. What formed the visible part of the transcommunity – overwhelmingly white, urban, and middle class – was also overwhelmingly focused on conferences, surgery or hormones and cisgender acceptance.

This was still a determinedly non-political population, often in defensive crouch because it was also constantly under attack by the media, police, local legislatures, feminists and even LGB-but-never-T advocates.

We were a group that still thought of ourselves as a collection of separate individuals, not a movement. What made political consciousness so difficult was that there was no “transgender section” of town, where we saw each other regularly.

And mainstream society mostly ignored us. And when it didn’t, it usually made clear it despised us. We were freaks. We were gendertrash.

We lived in a transient and indoor community that knew itself only a few days at a time during conferences at hotels out on the interstate.

But all that was about to change.

Even when politics are avoided, bringing despised and marginalized people together is itself a political act. Without realizing or intending it, the community was reaching critical mass.

Even in those pre-Internet, pre-cellphone days, enough transpeople were running into one another often enough to begin realizing we could be a force, that we didn’t really need cisgender acceptance. What we needed was our civil rights.

This is the inside story of how in just a few years, a handful of trans activists would come together in the face of enormous difficulties and opposition to launch from the very margins of society what would grow into the modern political movement for gender rights. 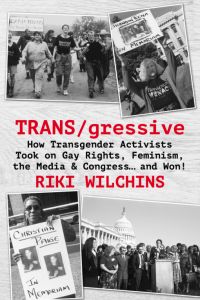 It began, as all serious things do, with a fight. That and then a murder.

The fight was the easy part. In the summer of 1991, Nancy Jean Burkholder, was accosted by security guards while attending the Michigan Womyn's Music Festival. It's highly doubtful she was the first transwoman to attend. But another attendee out to the po-po and they came on her in a group and told Nancy she was suspected of being… a man!

She was not allowed to notify her friends of what had happened, or where she was. Festival; Security kept Nancy waiting while they collected her belongings, unceremoniously dumping them and her outside the main gates at 2:00 a.m. literally on a road in the middle of nowhere with nothing within walking distance for miles and no phones anywhere. You do the math.

Festival owner Lisa Vogel then retroactively declared a policy of "Womyn-Born-Womyn Only" ---- which really meant “No Gendertrash Allowed.” The echoes of that noxious policy reverberated all the way to the island Manhattan, where I was busily trying to build a career and avoid anything that smacked of politics…

The murder was Brandon Teena’s. His was not the most recent transgender murder; it wasn't even the first that year. But Brando’s murder was different.

For one thing, for decades our victims have been overwhelmingly young Black transgender women in major urban centers.

But Brandon’s murder was not only violent and egregious, it was a direct product of the Nebraska sheriff who failed to protect him when he was raped, outed him to his killers when he filed a police report, and then forced him to stay in town while they went looking for him.

Brandon’s murder proved beyond a shadow of a doubt that transpeople could be considered so worthless, so non-human, that the police would not only fail to protect us but would actually help our assailants.

That's what got everyone's attention.

That, and the media coverage, which blamed him for his own assault (What could you expect? ‘She’ tried to pass herself off as the wrong sex), playing up the most salacious aspects of his pre-op status (Was ‘she’ packing? Did ‘she’ have sex with him?) all the while making sure to use the wrong name and pronouns.

So even in violent death, we saw clearly that none of us would be granted any dignity or legitimacy. Looking back at that, we knew none of us were safe. But a lot of us were angry…