Trump This! - The Life and Times of Donald Trump, An Unauthorized Biography

Who is Donald Trump? A presidential candidate? A carnival barker in billionaire’s clothing. A God? A joke? These are some of the many questions asked and answered in Trump This! The Life And Times of Donald Trump: An Unauthorized Biography written by New York Times Bestselling Author Marc Shapiro.

Bringing insight into the psychology and motivation of Donald Trump was the equivalent of solving a mystery. What guides Trump to the decisions he makes? Is his personality real or just a caricature driven smokescreen? Is he the living embodiment of a brand or does a heart and soul lurk beneath his flamboyant and often-bullying exterior? In answering those questions many heretofore unknown facts came to life.

His father allegedly ran with The Ku Klux Klan.

Trump punched out a teacher in the second grade.

The true story of how Trump avoided the draft.

The affair that wrecked his first marriage.

Why Trump sued a man because he had the same last name.

His biggest business successes and failures.

If you only discovered Donald Trump with the television show The Apprentice or with his recent entry into the Republican race for President of the United States, the chances are you think you know quite a bit about Donald Trump. But the reality is that, like all larger than life personalities, Trump has cultivated his public image well. He’s been selective in what he’s let out and, when pressed, he’s been quick to deny. Trump This! The Life And Times of Donald Trump: An Unauthorized Biography has dug deep into the truth that is Donald Trump.

And this is what we’ve found. 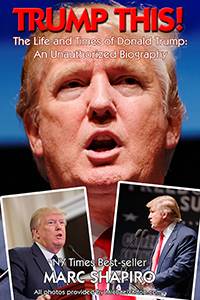 Trump This! - The Life and Times of Donald Trump, An Unauthorized Biography

That Trump's response to things not going his way seems like a walk through high school and playground politics and just plain bullying is part and parcel of his makeup. Like it or not, Trump's success in an adult world is very much balanced by an immature, juvenile streak. It was particularly evident in a book entitled Never Enough: Donald Trump and the Pursuit of Success in which his two ex wives cut to the chase.

Marla Maples described her former husband as "The little boy that still wants attention." Ivana Trump was equally succinct in describing Trump. "He wants to be noticed."

That the threat of a lawsuit came up early in his dealings with Spy Magazine is indicative of the fact that Trump and the threat of legal action are not strangers. In an article for The Daily Beast, writer Olivia Nuzzi, chronicled seemingly never ending instances in which he has sued businesses, people, entire cities and countries, a business card store and an Indian tribe. Nuzzi made a strong case for just why Trump sues at the drop of a hat.

"Trump sues when he is made to feel small, insufficiently wealthy, threatened or mocked. He sues for sport, he sues to regain control and he sues to make a point."