When Clara adds a brand new nutcracker to her favorite Christmas collection, she immediately starts having vivid, recurring dreams about her twelve wooden princes. As the holiday nears, her infatuation with the new nutcracker grows into a flirtation that sets the rest of the little soldiers against her. Dancing through an impossibly real battle in her sleep and dodging her infuriating family during the day, Clara’s holidays take a spin toward disaster. If she can survive both and make it to Christmas Eve in one piece, will Clara get to dance with the one prince she actually wants? And even if she does, what happens when the holiday passes and the nutcrackers are packed away for another year? 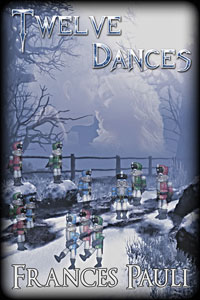 “You can tell me at the party.”

“Right. Sure.” What the hell had she been thinking? Clara hung up the phone and leaned her head against the wall. The stupid dream had shaken her up is all. She’d just woken feeling nostalgic and naturally reached out to family. “I’m losing my mind.”

Across the room, her nutcrackers stared and smiled their stiff grins. The dream dance whispered to her, the memory still crisp enough to cling to. She could hear the music, soft, familiar. Holy shit, she was losing her mind. Clara shook her head and turned her back on the princes. Dream or not, dancing with princes didn’t pay the rent, and she had to get to work.

The tree jingled overhead. Not again. Clara sat and stared at the branches. Same plums, same tree, same dress—she laughed and stood up. The ground shone with silver leaves, and the fog called with the echo of a distant oboe. She could think of worse dreams to be stuck in.

She shrugged and skipped down the path. This time she knew the world around her for a dream. This time she knew exactly what to expect and couldn’t help but hurry to the edge of the dance floor. Her princes would be waiting. Clara broke through the fog and slid out onto the smooth floor just as the nutcrackers began their march down the stairs.

She watched them this time, stood close enough to catch the details. The sound of boots rang out—march, march. Her nutcrackers lined up along the floor’s edge in coats of green, blue and burgundy. They wore tall hats, crowns, helmets and some sparkled with huge jewels. Each face was individual, though each wore the same, phony version of the nutcracker’s swirly mustache. Clara couldn’t help but smile at the stern expressions behind the ridiculous disguises.

Clara also couldn’t help looking behind them. Her eyes just drifted up to the spot where her newest prince stood. He already peered at her, eyes glinting like sapphires. His mouth twitched at a corner, and he tilted his head ever so slightly in her direction. Clara’s breath caught in her throat. She felt the heat of a blush creep into her cheeks. The nutcracker stood at attention, almost not smiling.

But her dance partner this time clacked out of line to her far left, and she had to scramble to meet him. She slid into his arms just as the music kicked up and they moved out into the dance. The floor tiles shifted under their steps, glinting in a pattern of holly berries and candy canes. Clara watched their feet slide over the tiles, leaned into the nutcrackers hold and stared out as the silver world swirled around them to the hollow notes of the oboe.