Twelve Upon A Time...

Twelve Upon A Time... is a storybook for families. Each monthly story is unique and illustrated by the original drawings of children whose interpretation of the words can only be seen through their eyes. The stories are written to assist the imagination of children and to strengthen the parent and child bond through the sharing of heartwarming, silly, absurd and believably impossible tales.

January: Bronto’s Visitors from Another Time follows the adventures of a family back to the time of prehistoric dinosaurs and their search for the time portal that began their misadventure on New Year’s Eve. February: Surprised by a Secret Admirer explores the growing friendship between two children and their special celebration of Valentine’s Day. March: Goggy and His Pot of Gold unfolds in the legendary country of Iarland in the town of Glocky Nora where children search for a leprechaun and his pot of gold. April: The Great Festival of Rabbunia follows the adventures of children to the mythical land of Rabbunia where they celebrate the Great Festival with the inhabitants of Rabbunia. May: The Mother’s Day Surprise tells the story of how children and animals strive to surprise a special mom on Mother’s Day. June: Memories in Five Balloons is a story of how a family survives with the death of their father and how they keep alive his memories each Father’s Day.

July: Furly and Kurly Color the Flag celebrates the birth of our country by visiting the woman who knitted our flag on our first birthday. August: The “Yad Gnihton Taerg” on the Mirror Planet celebrates the “Yad Gnihton Taerg” on the mirror planet Tenalp in the central city of Rorrim, a celebration that occurs just once every 500 years. September: The Underground Adventure shares the heartwarming story about animal friends who want to make the end of summer a special one for their human friends before going back to school. October: Trick or Treat with Bitty the Bat looks at the tradition of Halloween through the eyes of creature friends. November: ‘Twas the Night Before Thanksgiving... is a Thanksgiving story that unfolds in rhyme. December: The Magical Cane to Christmas’ Journey celebrates the warmth of the holiday season with a family whose children share the Christmas’ past of their parents through the magic and wonder of a special candy cane.

So sit back and relax with your children and cuddle up in that special place in your home as you enjoy the adventures that unfold one month at a time for a whole year in Twelve Upon A Time...

About the Author:
As a doctorate level practitioner serving school children for more than 35 years, Edward Galluzzi became keenly aware that children and their parents often had in short supply what families needed the most: open communication and sharing time together. Twelve Upon A Time… was written to provide families a moment here and a moment there to come together and share heartwarming, silly and believably unbelievable tales.
The stories are tied typically to the main holiday or theme of each month, more or less. The characters in the stories are based on what children relate to most… animals and other children. There are also over 100 colored drawings, reproduced in black and white, sketched by children ranging from 7 months to 12 years of age. The stories from my imagination and the drawings from theirs come together to stimulate the imaginations of children and open a whole new world for parents and their children to share.
That is my gift to your family. Time for sharing… time for laughing… time for talking… time for each other. Not once upon a time, but Twelve Upon A Time…. 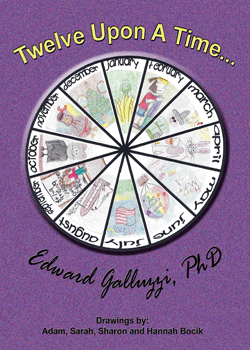 Twelve Upon A Time...